The Middlesex Democrat, who first won office in the post-Watergate year of 1974, defeated Pomfret Republican Scott Milne 60 to 33 percent. The AP called the race at 6:59 p.m., just a moment before polls closed in Vermont.

Around 8:20 p.m., Leahy, wife Marcelle and several of their grandchildren took to the stage of the Hilton Burlington as the Grateful Dead’s “Truckin’” played on the P.A.

“It has been a long strange trip, to quote Jerry Garcia,” the senator told a crowd of jubilant Democrats.

Leahy recalled that when he first took office, “public disgust with Washington [was] at an all-time high” — much like today. He said he hoped Tuesday night’s results would “send a very strong signal to the Republican leadership in Washington: Do. Your. Job.”

The incumbent also alluded to the harsh nature of his opponent’s campaign.

“Let’s return decency in place of the negativity we see,” Leahy said. “I have never run a negative ad. Everybody who’s run [one] has lost. Let’s show the nation how different we are.”

Welch declared victory about half an hour before Leahy spoke to the assembled Democrats. Calling Congress “broken,” Welch said he was “ready to go back” to Washington, D.C., in order to try to make it work. Referring to the presidential race, he said, “This election has been like a traumatic event for the country.” But he predicted that both Democratic presidential nominee Hillary Clinton and Democratic gubernatorial nominee Sue Minter would prevail.

“We are going to have the second woman to serve as governor of Vermont and that’s Sue Minter.” 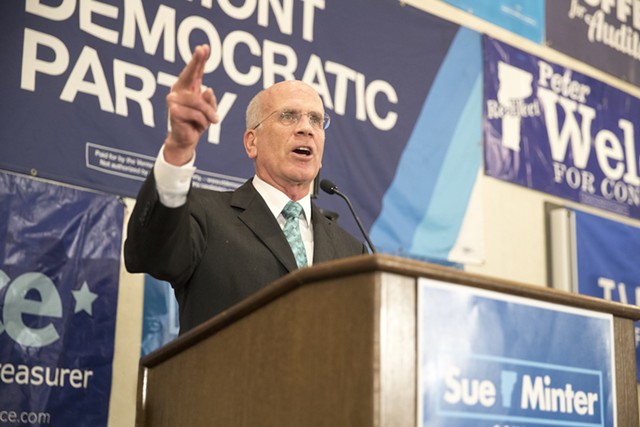 Milne, who nearly defeated Democratic Gov. Peter Shumlin two years ago, tried to make his 2016 Senate run a referendum on Leahy’s 42 years in office. In an underfunded and oft-ignored campaign, Milne repeatedly criticized the incumbent Democrat as out of touch with Vermont and beholden to special interests.

Throughout the campaign, Leahy sought to keep a low profile. He declined to participate in more than three debates and held few publicized campaign events. Instead, he took part in a series of federal funding announcements and hosted high-profile allies, such as Vice President Joe Biden and U.S. Housing and Urban Development Secretary Julián Castro, in an effort to remind voters of his influence in Washington, D.C.

Leahy long ago passed his predecessor, the late George Aiken, as Vermont’s longest-serving delegate to Congress. Just last week, he overtook the late Arizona senator Carl Hayden as the fifth longest-serving member of the body in its history. At the end of an eighth term, Leahy would follow only the late Hawaii senator Daniel Inouye and the late West Virginia senator Robert Byrd in all-time seniority.

Other candidates in the Senate race were Cris Ericson of the United States Marijuana Party, who won 2.8 percent of the vote; independent Jerry Trudell, who took 1.6 percent and Liberty Union nominee Peter Diamondstone, who picked up 1 percent.