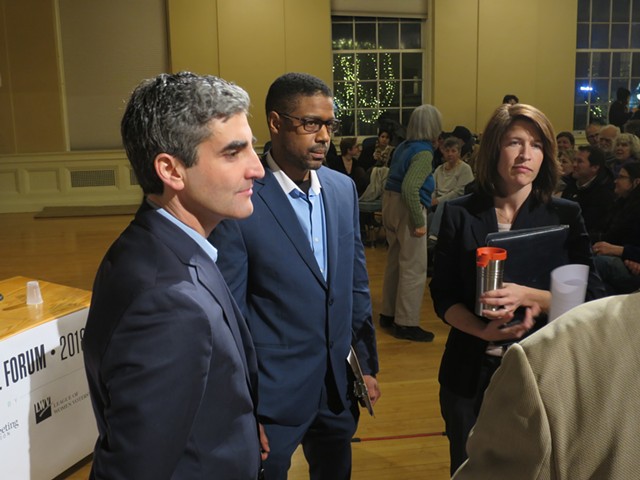 Burlington's mayoral candidates are making their final appeals to voters during the final sprint before Town Meeting Day.

Seven Days checked in to see how the Queen City mayoral hopefuls are spending their final seven days as candidates.

Weinberger found himself leaps and bounds ahead of his competitors in fundraising after Sunday's campaign finance filing deadline; he had raised $107,000, compared to $47, 000 for Driscoll and $10,500 for Culcleasure. But the six-year incumbent said he's not taking any chances.

Last weekend, Weinberger celebrated his 48th birthday — and with a team of supporters knocked on 2,000 doors across the city.

He plans a weeklong "major door-knocking effort" and a telephone town meeting Sunday, during which he'll field questions from Queen City residents.

Culcleasure did not respond to requests for comment. His campaign has scheduled canvas events every evening until the election, plus a dinner and a "conversation on poverty, jobs and dignity" in the Old North End March 2.

Driscoll said she'll spend her final days on the campaign trail holding a house party or two, doing a honk and wave, and working to get out the vote.

Driscoll said her lower fundraising total indicates a difference in style from Weinberger's — and doesn't necessarily put her at a disadvantage. "We’re doing all the same things, but we’re doing them as grassroots organizing," she said. Her average donation —$105 — is roughly half of the average donation that Weinberger has received, she said.

All Driscoll's canvassers are volunteers, she pointed out. The Vermont Democratic Party has contracted with University of Vermont student Lachlan Francis and his LLC, Windmill Hill Campaigns, which has worked for Weinberger and other Burlington Democrats and pays canvassers $50 to knock on 75 doors.

Driscoll touted the fundraising totals as giving her a moral high ground — saying that she has not invoked the financial support of her stepfather, Sen. Bernie Sanders (I-Vt).

"I made a decision that we would do this ... not leveraging the resources of Bernie’s name. I’ve remained committed to that," Driscoll said. She pointed out that when she received the endorsement of Our Revolution, an organization Sanders launched, the group's fundraising email didn't mention Sanders, and netted her only $680. She has sent out her own emails that emphasize her relationship with Sanders, and she received $1,000 in personal donations both from Sanders and her mother, Jane O'Meara Sanders.

To get elected, Driscoll likely needs to win over a portion of Weinberger's voter base and earn support from the far left, which Culcleasure is also trying to attract. Still, she said, she's seen "a lot of quiet support." "The thing you hope for is that the chips start to fall in your favor," Driscoll said. "It feels as though we’re there."

Weinberger said he's reached more Burlingtonians than during his two previous campaigns — partly because of the high number of students volunteering for his campaign. He's also seen more engagement from the New American community this election cycle, he said, noting that he earned the support of Shadir Haji Mohamed, board president of the Somali Bantu Community Association of Vermont, and members of Nepalese community.

Weinberger said he is confident of victory on March 6.

"I sense some momentum," he said. "On principle, I don’t leave the polls until they close at 7 on Tuesday ... We're not taking anything for granted."