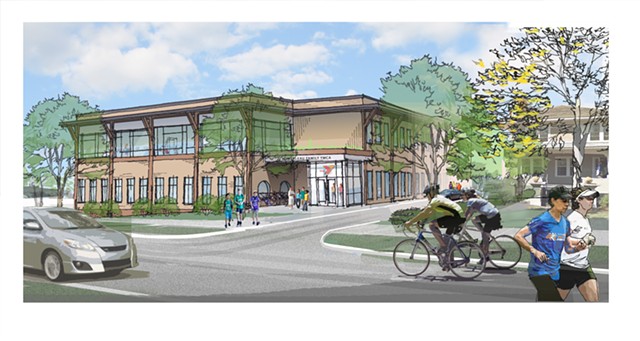 Leaders of the Greater Burlington YMCA called on the public Wednesday to help them raise the final $500,000 of a $15 million campaign for a new building.

Laura and David Stiller, son of Green Mountain Coffee Roasters founder Robert Stiller, are offering to help kickstart the renewed effort. They've pledged a dollar-to-dollar match for the first $100,000 in new gifts to the campaign, which YMCA officials hope to wrap up this summer.

The Y needs everyone's help to get to the final goal, the organization's president and CEO, Kyle Dodson, said at a press conference Wednesday in one of the preschool classrooms of the current building at 266 College Street.

Board member Terry Pomerleau, grandson of the late philanthropist Tony Pomerleau, who made many donations to the Y, said he knows firsthand how important the institution is to the community.

The name of the Staying in the Heart fundraising campaign alludes to the decision to keep the facility in downtown Burlington. Many alternative locations, including suburban ones, have been considered over the years.

Plans call for construction of a new facility at 298 College Street, about a block from the historic red-brick YMCA building.

The new facility will have modern fitness areas, an aquatic center and an early childcare wing. Its cost is estimated at $22 million; the sale of the current building will help.

That edifice is under a contract with developer Frank von Turkovich. It's unclear what he will do with the property. As of Wednesday, he had filed no paperwork for renovations with the city's planning and zoning offices.

The new Y would be built on the site of the former Ethan Allen Club building, which is set to be demolished this summer. Construction would begin in the fall for completion in 2020.