Two supporters of the controversial Rebels nickname who both ran unsuccessfully for the South Burlington School Board have each been fined $250 for campaign finance violations.

In addition to paying the fines, Danial Emmons and Marcy Brigham agreed in a July 17 settlement with the Vermont Attorney General's Office to refile their campaign finance reports.

The AG office's investigation found that the two had violated several state statutes during their write-in campaigns for the March 7 election. Both decided to run after the school board voted in February to drop the Rebels nickname over concerns that it has racist associations with the Confederacy.

According to the investigation: Neither Emmons nor Brigham established a specific bank account for donations, as the law requires. Brigham accepted a single cash donation of $1,000, in violation of a state statute that says cash contributions cannot exceed $100. Emmons, on his filing, did not itemize two contributions that he received of more than $100.

The investigation also found that Brigham transferred a $900 donation surplus to the Rebel Alliance political action committee and did not report the March 31 transfer in her campaign finance filing, according to the settlement.

The PAC is still soliciting donations to support an ongoing lawsuit filed by its members and as part of its ongoing effort to save the Rebels name. The school district, meanwhile, has moved on, ordering sports jerseys with the high school's new mascot name, the Wolves.

Emmons said that Vermont campaign finance rules are more complicated than he thought. He considers the settlement a reasonable outcome.

"I made some minor mistakes. The AG's office was more than fair and I'm thankful for their understanding. Lesson learned," Emmons told Seven Days in an email Thursday. 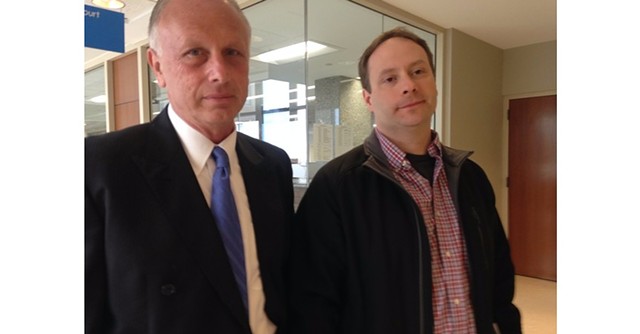 South Burlington residents Paul Engels and Monica Ostby — supporters of dropping the Rebels nickname — made the complaints against Emmons and Brigham.

Engels, a former city councilor, on Thursday applauded the state for investigating what some might see as a fairly minor local election.

"I'm really glad that the attorney general investigates and takes these things seriously," Engels told Seven Days. But, he noted, the settlement came months after the election, not soon enough to remedy the wrongs, in his view.

"They lost, but the cause won, that's the problem," Engels said. "We went through two other really difficult school budget (votes) after that before we finally got a school budget. And look at all the fallout from it.”

He was referring to the various conflicts that arose after the South Burlington school board voted to drop the Rebels nickname. The decision created a tense atmosphere in the community, where heated arguments broke out, lawsuits were filed, the district's schools were locked down, and threats were made on social media.

Emmons himself was charged with stalking Isaiah Hines, a since-graduated student leader who led the push to drop the Rebels name. In June, Emmons admitted to bad behavior and, through his attorney, asked the judge to dismiss the stalking allegation for a lesser charge.

The matter is still before the judge.