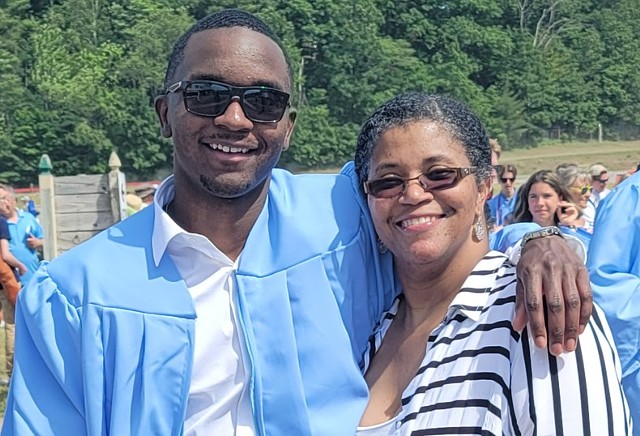 A South Burlington High School teacher who made a racist remark in the classroom in March was allowed to continue teaching and quietly retire at the end of last school year — even after an internal investigation found he’d violated school policy. Now, the mother of a teen who overheard the comment is publicly condemning the district for not taking the matter more seriously.

Travia Childs, who is also a member of the city's school board, took to Facebook on Thursday to call out the district for failing to protect her son, who is Black, from racial harassment. In a subsequent interview with Seven Days, Childs said she made the allegations public because the teacher “got away with it” while her son suffered.

The teacher “retired as a leader in the community and the school, and no one knew,” Childs said. “It was just time.”

In early March, Childs had just been elected to serve on the South Burlington School Board when her son, Jeremiah, a senior, texted her about an incident in his Robotics Engineering class. Jeremiah told his mother that the teacher had suggested that a 3D-printed object that resembled a noose should be hung from the school’s Black Lives Matter flagpole.

Related Stepping Up: These Vermonters of Color Want to Bring Their Perspectives to Local Office

Stepping Up: These Vermonters of Color Want to Bring Their Perspectives to Local Office
By Alison Novak and Sasha Goldstein
Politics
Childs named the teacher in her online post. Seven Days has contacted the person for comment.

The teacher was put on leave while the district launched an internal investigation. The probe concluded that the teacher had violated the school’s harassment, hazing and bullying policy. In a written statement Thursday, Superintendent David Young said he “issued significant consequences that cannot be disclosed for privacy reasons.” The superintendent said he allowed the teacher to return to the classroom and retire at year’s end. The district did not name the teacher in its statement.

Childs said the teacher should have been fired for the trauma inflicted on her son, who, through Childs, declined an interview with Seven Days. Childs' Facebook post, which addressed Young directly, expresses her disappointment in the district’s handling of the incident.

“Your actions support that you continue operating in the white privilege environment. This man laughed about a noose, and you don't get it,” she wrote. “It's sad that you speak about equality, but your actions are prejudiced. This cannot be real; it has to be a nightmare.”

In June, Jeremiah filed a grievance against the district with a list of demands, including that Young and the teacher apologize, and that school policy be changed to allow teachers to be fired “if found guilty of racial harassment,” according to the document obtained by Seven Days. Jeremiah also demanded money damages for post-traumatic stress, writing that he’s experienced anxiety, depression and sleeplessness since the incident.

“Punitive damages show South Burlington School District and other districts that racial acts will not be tolerated in Vermont,” Jeremiah wrote. “Punitive damages also illustrate what happens when a school district’s first thoughts protect a Unionized Teacher instead of a student.”

In response, Jeremiah received an email from Pietro Lynn, an attorney representing the district’s insurance carrier, the Vermont School Boards Insurance Trust, informing him that “there is no basis in law for a liability claim against the District.

“For that reason, VSBIT declines to make any voluntary monetary payment to you,” Lynn continued. “I know that the District deeply regrets any distress experienced by you. It wishes you success in all your future endeavors.”

Young did not immediately respond to an interview request, but his statement says the school board is hiring a third-party consultant to review the district’s handling of the incident. School board chair Bridget Burkhardt declined to comment on how the administration responded to the allegations while that review is pending.

Burkhardt, in an interview, said Childs recused herself from the school board's vote on the third-party review.

Racial incidents have bubbled up frequently in the suburban school district during the last few years. The school board dropped the district's former nickname, "the Rebels," in 2017 after student complaints about the moniker's racial connotations and linkage to the Confederacy. That sparked strong backlash, led by a group of alumni who created a group called the Rebel Alliance.

Related A South Burlington Grad Reflects on Renaming the Rebels

A South Burlington Grad Reflects on Renaming the Rebels
By Molly Walsh
Education
During the contentious debate in 2017, two teens were arrested for separate crimes related to the name change: One for spray-painting athletic fields with racist graffiti and another for making death threats.

Last June, someone vandalized a Black Lives Matter banner that students erected outside of Tuttle Middle School, not long after the murder of George Floyd.

In February, Childs, then a candidate for school board, was featured in a Seven Days cover story about people of color running for local office. She said then that some people during the campaign had questioned her credentials.


"They're trying to find stuff, but there's nothing out there," she said at the time. "I guess it's hard to see a woman of color that has a bachelor's in chemistry, an MBA and a doctorate."

All five South Burlington schools are flying the Black Lives Matter flag, Young wrote. Burkhardt, in an interview Thursday, said that the school board is currently crafting an equity policy and plans to hire a director of equity. Once that person is on board, “we hope to go through a full review of our policies and procedures,” she said.

“We're really working hard to try to build a district where kids feel like they belong and where they can really grow to the best of their ability,” Burkhardt said. “Obviously, this is not the kind of scenario we would like to see happen again.”

Meantime, Jeremiah has started college in Texas. He’s told his mom that he doesn’t want to come back to South Burlington, even for the holidays.

“The thing about South Burlington — we’re supposed to be perfect, the best of the best. And no one wanted to believe” that racism happens here, Childs said.

But she isn't completely disheartened. As more students speak out against racism, "some people want to see," Childs said. "They’re glad to know that this is happening and want to do better."
Prev
Next