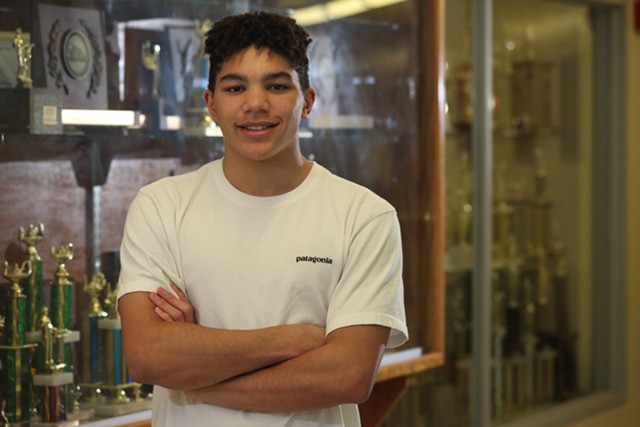 A South Burlington High School student’s message about “white fragility” is getting noticed in a big way.

Isaiah Hines, the 18-year-old senior who pushed the school board to abandon the Rebel nickname, became a viral hit this week for the race-related Facebook post. It’s also the latest virtual tussle over the controversial school name, which a group called the Rebel Alliance has staunchly defended.

Hines, who is black, posted a long retort last week to someone who circulated a photo that shows him in school standing next to a projected image of a slideshow that reads, “White People Are Fragile.” Christy Fay posted the image online and wrote, “THIS is considered acceptable in our high school?”

The short answer, according to Hines, is yes. Someone took the photo last school year as he presented about white fragility as part of a final project for his AP psychology class. Westfield State University professor Robin DiAngelo came up with the phrase, said Hines, who got the OK to discuss the topic from his teacher before presenting.

“It refers to a mental state in which even a minimum amount of racial stress becomes intolerable, triggering a range of defensive actions and biological responses,” he wrote in his post. “It is a well-documented psychological phenomenon and it was entirely appropriate for the assignment.” 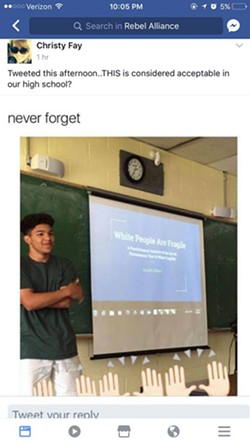 People have contacted Hines from South Africa and Vietnam, among other places, to tell him how much his message has meant to them.

“I’m pretty excited,” Hines told Seven Days. “I think it’s pretty cool that my presentation has resonated with so many people all across the world. The reaction I’ve seen has been primarily positive.”

His classmates, too, found it enlightening, according to Hines, who said the most negative reaction came from those opposed to the name change.

“I did find it just a little funny how many of the people responding to this image with anger or indignation are actually displaying the psychological concept in action!” he wrote in his post. “It is absolutely possible to break the cycle and challenge or question this theory without engaging in the problematic behaviors associated with white fragility. However, it seems many people will still surrender to white fragility and become needlessly defensive and angry rather than engaging in constructive dialogue.”

Fay, who originally posted Hines’ photo, did not immediately respond to requests for comment.

Hines has been at the center of the Rebels debate since he began a campaign to change the name on the grounds that it alludes to the Confederacy and thus has a racist connotation. The school board in February voted to change the name and added money to the school budget to wipe “Rebels” from school playing fields, banners and uniforms.

The Rebel Alliance has urged its supporters to vote down the school budget. The city will try on Tuesday for the third time to pass a spending plan — but the battle is fierce.

Signs urging both yes and no votes have sprouted on front lawns and along South Burlington thoroughfares as the vote nears. Both sides have accused the other of stealing signs. And supporters of each have raised money to do political battle.

Both sides have spent most of their cash on newspaper advertisements, yard signs and other supplies, according to the reports.

The students at the high school, meanwhile, recently voted to rename the mascot the Wolves. While Hines voted for the Dolphins, he said, he’s happy to have even gotten to this point.

“The kids are so beyond it, and it’s just being dragged out,” Hines told Seven Days of the name change.

“I’ve been saying this the whole time: The kids, the actual students, are so much more adaptable and more mature than the adults,” Hines added. “I had friends who liked the Rebel name, but they were so understanding and willing to see it from another perspective — which I think the adults could do more of.”