McAllister’s Former Lawyers Subpoenaed for His Plea Hearing | Off Message 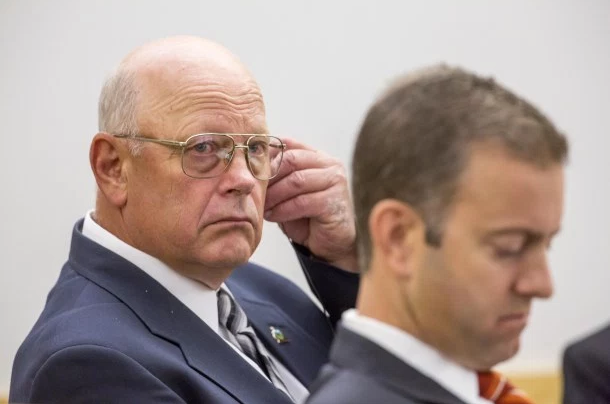 Burlington lawyers Brooks McArthur and David Williams have been subpoenaed to appear in court Friday when their former client, Norm McAllister, attempts to withdraw from a plea agreement.

“It wasn’t an invitation,” McArthur noted in an interview with Seven Days. He also said, “I don’t know if we’ll actually have to testify but I have to be there. It’s no longer my decision whether or not I can be there; it’s a court order.”

McAllister, a former Republican state senator from Franklin County, agreed to a plea deal on January 10 while McArthur and Williams were representing him.

Under the agreement, McAllister pleaded no contest to two misdemeanor charges of prohibited acts and one felony lewd and lascivious charge that could carry up to seven years in prison. That charge was reduced from sexual assault.

The next day, McAllister announced he was considering firing his lawyers and hiring a new attorney to help him get out of the deal.

His new lawyer, Bob Katims of Burlington, stated in a motion to withdraw the plea that McAllister’s former lawyers pressured him into the agreement.

McArthur declined to comment on that claim Monday, but said he assumed that he and Williams were called by the state to help prosecutors make their case against the plea withdrawal.

“Given that it’s the state that’s subpoenaed us, the state’s position must be that whatever testimony we have to offer must support their position that Norm McAllister must not be allowed to withdraw,” McArthur said.

Communications between attorneys and clients generally are considered privileged, or exempt from disclosure. McArthur and Williams have hired their own attorney — Craig Nolan — to represent them.

Deputy State’s Attorney John Lavoie has filed a motion asking the court to deny McAllister’s request, saying he has not provided a “fair and just reason” to withdraw his plea.

The deal was not hatched at the last minute, Lavoie’s filing says, and came after negotiations from January 6 through 10.

The defendant fully understood what he was agreeing to, according to Lavoie’s motion. It says the state would “suffer substantial prejudice” if the defendant were allowed to withdraw his plea. A new jury would need to be selected and the alleged victim would suffer “additional emotional upset of preparing for trial again.”

Lavoie did not respond to a message seeking comment Monday.

Here’s the state’s response to McAllister’s request to withdraw his plea:

State's Response by SevenDaysVermont on Scribd