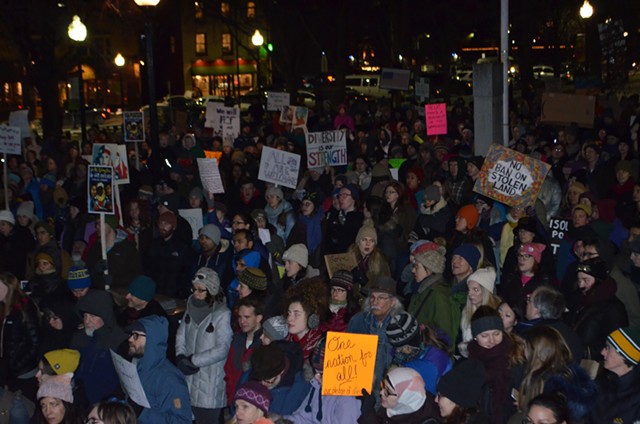 Rights and Democracy and the Burlington branch of the International Socialist Organization organized the rally after Trump signed an executive order closing the country to refugees and people from seven countries. Protesters filled a large swath of City Hall Park before they marched up Church Street.

“We had to do something to stand up,” said Nolan Rampy, one of the organizers.

Speakers decried Trump’s plans to build a wall on the Mexican border, the executive order curtailing refugee resettlement and the administration’s bellicose rhetoric toward foreign countries.

“No one is illegal; refugees are people,” the crowd chanted at one point.

“Hate won’t make America great again,” one sign read. “France called, they want the Statue of Liberty back,” read another.

Speakers included Winooski attorney Faisal Gill, who was born in Pakistan and is on the board of directors at the nonprofit Justice for All.

“When Mr. Trump looks at me, all he sees is a terrorist,” Gill said. “Well, screw him. To him, brown equals criminal; brown equals terrorist. Screw him.”

The rally appeared to draw many people who don’t usually engage in political activism.

“It’s hard to sit at home doing nothing,” said Burlington resident Molly O’Brien. “It felt necessary to take the time and get out on the right side of history.”

Sami Jarjour, a Syrian American from Colchester, said he is usually too shy to attend political rallies and mingle in large crowds.

But Trump’s refugee ban and his stance on environmental issues prompted Jarjour to come out, he explained as he marched up Church Street.

“I need to take a stand. I need to get out of my bubble,” Jarjour said.