Burlington police, who were summoned to the apartment by a mental crisis worker, tried for five hours to negotiate with Ralph “Phil” Grenon, Vermont State Police said. Around 10 p.m., Grenon approached officers with two knives in his hands and refused to drop them, Vermont State Police said. Officer David Bowers, 23, fired multiple shots at Grenon, who was pronounced dead at the University of Vermont Medical Center.

Grenon had been diagnosed with paranoid schizophrenia and was involuntarily medicated in the former Vermont State Hospital several years ago after refusing treatment, according to court records.

Grenon had threatened to kill several neighbors in recent weeks, and local crisis workers had several encounters with him.

“This whole thing started as an effort to deliver services to Mr. Grenon,” del Pozo said. “There are several things we did to bring this to a nonviolent resolution. We deployed every [nonlethal] device in our arsenal. If someone would present me with a perfect plan that could guarantee the safety of him and the officers, we would implement it. If the outcome went well, none of you would have ever known it happened.”

Vermont State Police gave the following account of the shooting:

Around 5 p.m. Monday, a crisis worker from Burlington’s Street Outreach Team, tasked with caring for mentally ill people and calming situations without the help of police, summoned Burlington officers to Grenon’s apartment.

While officers were en route to 101 College Street, police received a call from the building manager who told them that tenants said Grenon was acting in a threatening manner. 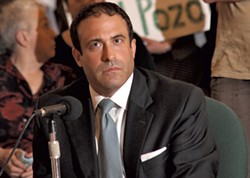 Grenon refused to open his door for police. When officers opened it, Grenon stood with knives in each hand, and ignored commands to drop them. Officers fired a stun gun at Grenon, “which was not effective.”

Grenon shut the door and the officers backed away. During the next few hours, officers tried talking to Grenon, but he was unresponsive. Police drilled a hole above the apartment door and inserted a camera, but could not see Grenon.

In order to “check on his welfare,” officers with tactical shields entered the apartment. They found Grenon hiding in the shower with the curtain drawn. When officers pulled back the curtain, they saw he had at least one knife in his hand. Officers backed away and told Grenon to come out. They fired “pepper balls,” projectiles with a chemical irritant, into the bathroom, but Grenon remained in the room.

After a while, officers again entered the bathroom and pulled back the shower curtain. Grenon was holding “two large knives” and began making a thrusting motion with one of them. Officers again fired a stun gun, but Grenon walked toward them with both knives.

Grenon did not speak with officers during the entire encounter. “Not one solitary word,” del Pozo said. “He gave us nothing to go on.” Crisis negotiators on the scene attempted to call Grenon on 12 occasions but he never answered his phone, del Pozo said.

Del Pozo said he was attending firearms training at the Vermont Police Academy in Pittsford last night, but arrived at 8 p.m. to take command of the scene.

State police and the Chittenden County State’s Attorney’s Office will review the shooting.

Burlington police have turned over their body cameras to investigators, state police said. An autopsy is scheduled for later Tuesday.

“We fully support this important exercise of democratic oversight of our use of deadly force,” del Pozo said in a prepared statement. “We expect the full disclosure of facts, identities and evidence as the process of law allows.”

In March 2009, Grenon was charged with misdemeanor unlawful trespass. He allegedly entered a Kinko’s in Burlington and harassed customers for two hours, according to Chittenden Superior Court records. Grenon accused an employee of misplacing documents he said he left in the store, and refused to talk to police officers, according to a police affidavit.

He resisted while officers handcuffed him, and refused to talk to police back at the station, according to the affidavit.

Grenon was sent to the Vermont State Hospital for a psychiatric evaluation in April 2009, and had a guardian ad litem appointed to represent him.

After refusing medication and engaging in “several aggressive episodes in the hospital,” Grenon was involuntarily medicated, psychiatrist Richard Munson wrote in a letter to the court.

“He has schizophrenia … which causes him significant impairment in reality perception, thought process, mood and judgment,” Munson said. “He says he is not ill and that any talk to the contrary shows a conspiracy.” A judge deemed Grenon incompetent to stand trial and ordered him hospitalized for up to 90 days.

His was the second fatal police shooting in Burlington in four months. In December, members of a Drug Enforcement Administration Task Force shot and killed an alleged drug dealer on Elmwood Avenue after he brandished a firearm at them when they entered his apartment.

In November 2013, Burlington police officers killed a mentally ill man who walked toward them with a shovel and refused commands to drop it.