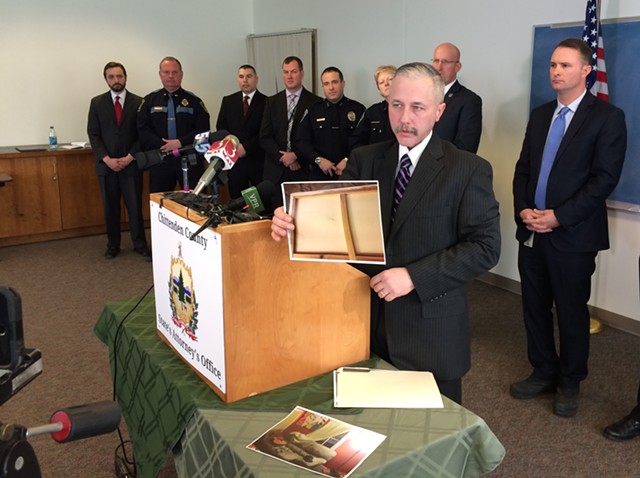 As officers swarmed Stephens' Elmwood Avenue apartment, he asked police, "Who wants to die?" He taunted officers trying to break down his door to "hit harder" and raised his muzzleloader rifle when they finally entered.

Police took about 15 seconds to knock down the door, and fired immediately upon entering. The agent and trooper fired 13 shots within two seconds, Donovan said. "It's clear that the filing of criminal charges ... is not supported by the facts," Donovan said. "This happened extremely quickly. I can't overemphasize that fact."

While the cops' use of force was ruled justified, questions remain about the decision to use a controversial "no knock" warrant and to storm Stephens' apartment instead of trying to arrest him outside. A DEA informant had bought drugs from Stephens, 56, on multiple occasions in weeks preceding the raid.

The DEA initially planned to arrest Stephens outside, Donovan said. Authorities changed tactics after learning he had purchased drugs that were possibly stored inside his apartment, and that he might be under the influence of drugs.

DEA representatives did not attend the press conference. U.S. Attorney Eric Miller said the agency is conducting an internal review of the raid.

But Vermont State Police Major Glenn Hall said, “nothing indicates that the operation was outside of standard practice for law enforcement executing a search warrant like this.”

Stephens had at least six criminal convictions, and was most recently released from prison in August 2014. One of his convictions was for being a felon in possession of a firearm, for which he served more than 15 years in prison. Prosecutors dropped a charge of attempted murder against Stephens, who allegedly shot his girlfriend’s brother in the head during an argument in 1996.

Despite his criminal history, Stephens was able to have his rifle without running afoul of any state or federal laws. Federal law banning felons from possessing firearms has an exemption for muzzleloading rifles, shotguns, and pistols that rely on black powder, Miller said. Vermont law allows it too. It is unclear if Stephens knew of the exemptions.

“We don’t have a lot of gun laws in Vermont,” Donovan said.

After the shooting, investigators learned that Stephens had been distraught about the recent death of his daughter. He had also told people that he would never willingly surrender to police.

“If they come to get me they are going to have to kill me because I am not coming back to jail,” Stephens told a fellow inmate when he was serving time, according to Donovan.

The only officer on the scene wearing a body camera was a Burlington cop who stood toward the back of the team that stormed the apartment, Burlington Police Chief Brandon del Pozo said. Video footage from that officer’s camera — which authorities released later Thursday— did not capture the exchange of gunfire. However, it recorded audio from both Stephens and the cops who fired.