Peter Welch Backs Sanders Over Clinton for President | Off Message 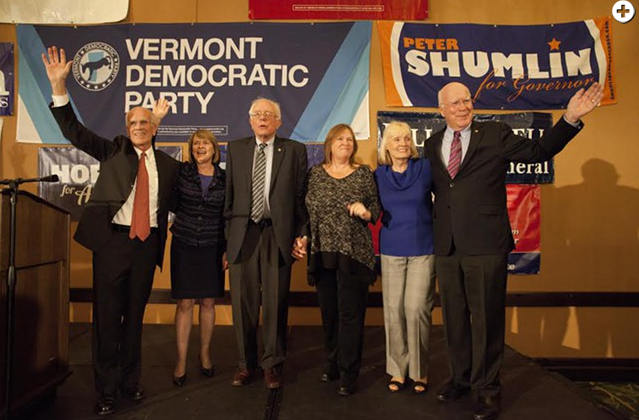 Congressman Peter Welch (D-Vt.) broke his silence Friday on whom he will support for the Democratic nomination for president. It's Sen. Bernie Sanders (I-Vt.).

Welch was among the few top Vermont Democratic leaders who had declined to choose between his home-state senator and former secretary of state Hillary Clinton.

Welch said later Friday in an interview that he’s been impressed by Sanders’ campaign, by the way he has energized young voters with “the right message at the right time.”

“Also, there’s a Vermont pride issue, too. Bernie’s a Vermonter. He’s doing an amazing thing,” Welch said. “Let’s give him a shot.”

Welch had stopped by Sanders’ campaign kickoff in Burlington in May, but explicitly steered clear of endorsing either Sanders or Clinton, in contrast to other high-level Vermont Democratic leaders.

Clinton has the support of Sen. Patrick Leahy (D-Vt.), Gov. Peter Shumlin and former governor Howard Dean, who are also superdelegates to the convention. Former governor Madeleine Kunin, though not a superdelegate, also supports Clinton.

Welch said he hadn’t told Sanders he would be backing him, and neither Sanders nor Clinton had lobbied him for his support.

"I very much appreciate Congressman Welch's support," Sanders said, in a statement released by spokesman Michael Briggs. "We have been friends for years and have worked together on issues of great importance to Vermont. His support means a great deal to me."

For Welch, endorsing Sanders is a safe political bet in Vermont, where the independent senator is likely to win the state’s primary. But as a well-entrenched member of Congress, Welch is making something of a statement by backing the upstart candidate.

Though Sanders is widely expected to win in Vermont, Clinton is hoping to snare at least some of the 11 delegates up for grabs in the March 1 primary, as Seven Days reported this week.