Sanders Returns to Nevada for Final Caucus Campaigning | Off Message 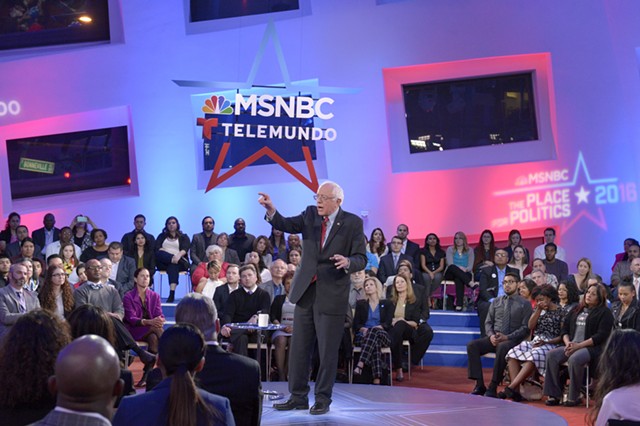 A hundred yards from the slot machines and blackjack tables at the Tropicana Las Vegas, Sen. Bernie Sanders (I-Vt.) on Thursday night railed against “the greed and recklessness” of the economic and political establishment.

Sanders had returned to Nevada two days before the state’s Democratic caucuses for one last dash from Vegas to rural Elko to Reno and back. At the Tropicana’s Trinidad Pavilion, he rallied the troops during a pre-caucus dinner hosted by the Clark County Democratic Party.

“I hope as many people as possible come out and that Nevada shows this country what democracy is about, with a very large turnout,” the senator told the crowd of some 700 Democrats.

In recent weeks, Sanders has erased presidential rival Hillary Clinton’s once-sizable lead in the state, according to a CNN poll released Wednesday showing them in a statistical tie. But unlike Iowa and New Hampshire, Nevada has little history as an early nominating state, so fewer voters are aware of the caucuses and the results could be difficult to predict.

“We have to have people show up,” said Joan Kato, Sanders’ Nevada state director. “I think a good turnout will be good for us. Lots of people on the ground are very excited. There’s a lot of energy.”

According to Kato, the Sanders campaign has opened 12 offices around the state and has more than 100 paid staff members on the ground. It’s up against a formidable Clinton apparatus, which has been in Nevada months longer. Until recently, according to several published reports, Sanders was outspending the Clinton campaign on television advertising in the state, though she has now pulled ahead.

In a nod to the importance of organized labor here, both candidates joined a picket Thursday at Sunrise Hospital & Medical Center and shook hands with members of the powerful Culinary Union. Unlike in 2008, when it bestowed a last-minute endorsement upon then-candidate Barack Obama, the 57,000-member union has vowed to stay neutral this time around.

Sanders peppered his remarks at the Tropicana with references to local issues, criticizing the state Public Utilities Commission for its decision late last year to cut solar generation rates. The move resulted in at least 550 layoffs at SolarCity, a California-based renewable energy company with a heavy presence in Nevada.

“Why are you not utilizing solar energy to the greatest degree possible?” he asked. “Why are we not making it easier for people to have solar panels — not harder?”

And Sanders went out of his way to praise Senate Minority Leader Harry Reid (D-Nev.), who was responsible for bringing the early caucus to the state and who plans to retire at the end of the year.

“Harry Reid will be missed very, very much,” Sanders said. “As all of you can imagine, it is not easy being the leader of the Senate Democrats. In fact, it is hard to imagine why anybody would want that job.”

The Vermont independent used the speech to announce that the Clark County Black Caucus had endorsed his campaign. African Americans make up about 11 percent of the county’s population and 8 percent of the state’s.

Earlier Thursday night, Sanders and Clinton appealed to the state’s heavily Latino population by focusing on immigration reform during back-to-back appearances at a forum broadcast by MSNBC and Telemundo. More than a quarter of Nevadans identify as Hispanic.

“As president I will do everything that I can to pass immigration reform and a path toward citizenship for those who today are undocumented,” Sanders said at the forum.

The senator defended his opposition to a 2007 immigration reform bill, which the Clinton campaign has cited as evidence that he is a newcomer to the cause.

“Included in that legislation was a guest worker provision which [Latino and labor] organizations saw as almost akin to slavery,” he explained. “Guest workers came in, and if they didn't do what their bosses wanted them to do, if they didn't accept exploitation and cheating, then they're going to be thrown out of this country. And many of those workers were terribly, terribly exploited.”

Both Clinton and Sanders promised to act quickly upon taking office to roll back policies that they see as inhumane to undocumented workers. Clinton promised to do so within the first 100 days, while Sanders noted the political obstacles he’d face.

“I'm not a dictator here,” he said. “It has to do with a little bit of cooperation from the Congress. But, it is a major priority when you have 11 million people living in the shadows. I think we owe it to them to move as expeditiously as we can.”

The forum included some moments of levity, such as when an audience member asked Sanders if he considered himself a feminist.

“I consider myself a strong feminist. And, in fact, Gloria Steinem — everybody knows Gloria is one of the leading feminists in America — made me an honorary woman many, many years ago,” he said, referring to the prominent Clinton supporter. “I don't know exactly what that meant, but I accepted it when she came to campaign for me.”