Border Patrol Under Fire for Using Stun Gun on Woman 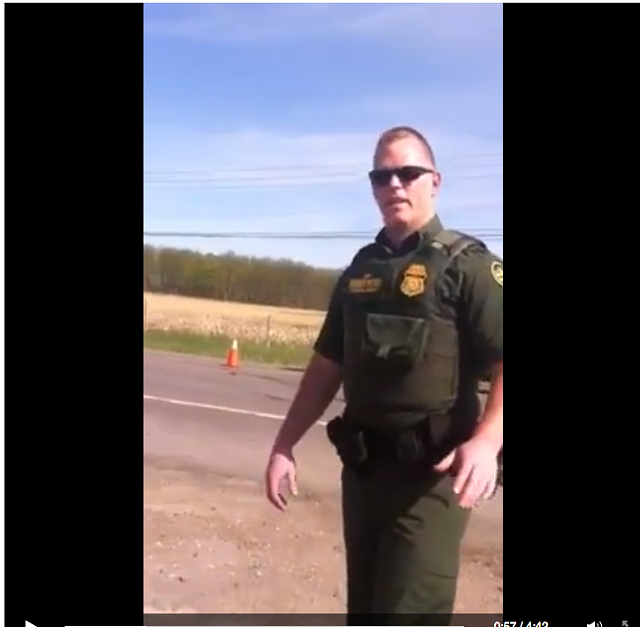 Updated at 4:22 p.m. to include statement from Border Patrol.

U.S. Border Patrol agents in Vermont years ago stopped conducting "internal checkpoints" after citizens complained that they were being unnecessarily pulled over and questioned even though they were sometimes more than an hour from the border. But an incident at a similar checkpoint in the border town of Waddington, N.Y. on Thursday has sparked a heated controversy.

Jessica A. Cooke, 21, of Ogdensburg, N.Y., was detained as she drove to her boyfriend's house. Agents have wide legal latitude to stop vehicles up to 100 miles from the international border. During the encounter with Cooke, agents apparently decided that she appeared nervous. They had her pull to the side of the road after the initial encounter and sent for a canine to sniff the vehicle.

Cooke videoed the subsequent encounter with two agents on her cellphone, and it's since been posted to YouTube. The New York Civil Liberties Union has called the footage "disturbing."

Cooke repeatedly challenged two agents, a female who initially pulled her over and a male supervisor, about why she was being detained. Cooke eventually threatened to call 911 if they did not soon release her.

"OK, good luck with that," the male agent said.

Cooke continued to press them. "Why am I being held?" she said. "Why do you want to get in my trunk when you have no right to?"

The male agent explained that she could leave, but her car would have to remain until a search was performed. If she tried to drive off, he said, he would spike her tires. He then ordered her to stand to the side. She refused.

"If you touch me, I will sue your ass," Cooke said.

"Move over there now," he replied.

"Go ahead and touch me," Cooke said as he approached.

Her cellphone fell to the ground during an apparent struggle, but the recording captured Cooke seconds later howling in pain and demanding the agents remove the Taser probe from her back. "Get it out of me! Get it out of me! I didn't do anything to you! ... You fucking Tased me, you asshole! Get off of me!" she screamed.

Cooke later said the female agent shot her with a Taser as the male agent wrestled her to the ground. She was held in a Border Patrol holding station for several hours before a local sheriff's deputy drove her home.

As Seven Days described in a cover story last week, Swanton is the headquarters for the Border Patrol sector that is responsible for eastern New York, including Waddington, and all of Vermont and New Hampshire. Swanton sector spokeswoman Teresa Moody said the agency is continuing to investigate the incident and has notified the Department of Homeland Security's internal investigative branch, the DHS Office of the Inspector General.

"The altercation followed a brief verbal exchange between the individual and the two agents regarding their intent to inspect the vehicle," Moody said in a prepared statement. "CBP investigators have analyzed the scene of the incident, are taking statements and have reached out to the individuals involved. Based on preliminary information from the investigation, one of the two agents deployed an electronic control device during the altercation."

Cooke did not respond to a message seeking comment from Seven Days. In media interviews, Cooke said she was planning on hiring an attorney and pursing legal action against the Border Patrol.

“This disturbing video is just the latest report to raise serious concerns about the intrusiveness of Border Patrol's tactics and whether or not they are following the law when they detain people at checkpoints,” a New York Civil Liberties Union attorney said in a prepared statement. “Border Patrol should only detain people for extended periods at checkpoints when there is a reasonable suspicion of criminal activity. Tasers are also dangerous weapons that require rules and oversight to ensure they are only ever used when force is needed to address a risk of imminent harm to officers or others.”

Cooke just graduated from SUNY Canton with a degree in criminal justice. She told the Watertown Daily Times she still plans to pursue a career in law enforcement.

"Of course, I second-guess it," Cooke told the paper, "but it takes something like this and someone like me to change it."