Update 3/20/14: These tracks are previews of the full songs. The full versions are available on CD and for digital download.

Yes, dear reader, we here at Seven Days have been puzzling over the same question that is keeping you up at night: If Bernie Sanders runs for president, what will he choose as his campaign song?

Bill Clinton famously used Fleetwood Mac’s "Don’t Stop." Ronald Reagan had Bruce Springsteen’s "Born in the U.S.A." And, of course, who could forget William Howard Taft strolling onto stage to the sounds of "Get on the Raft with Taft."

But what song could possibly suit a man whose identity — Vermonter, native New Yorker, Socialist — seems engineered by a higher power to give Fox News commentators an aneurysm?

Well, a Sanders campaign theme song could be music recorded by … Bernie Sanders.

In 1987, while serving as Burlington’s mayor, Sanders recorded an album of folk classics for the defunct BurlingTown Recordings label. We found it in the archive search for "Bernie Beat," the new digital guide to Sanders' colorful political career that launched today on the Seven Days website. Find it at Berniebeat.com.

Behold, our man in Washington’s take on "This Land is Your Land."


We here at Seven Days have long believed that the dulcet tones of Sanders’ voice would prove an asset to the recording industry. But even we were impressed by the heights to which his guttural, Brooklyn-strained-through-a-wood-chipper accent elevated the classic "We Shall Overcome."


While savoring these songs, the listener might wonder, you know, how the hell something like this ever happened.

Todd Lockwood, a Burlington-based author/photographer/musician, remembers sipping coffee at Leunig's Bistro one morning in 1987 when he came up with the idea of recording then-mayor Sanders at his White Crow Audio studios. (Phish recorded early albums there.)

“I’m not sure where it came from,” Lockwood said of his brainstorm. “I thought, ‘You know, there’s an idea.’”

On a whim, he called the mayor’s office — he didn’t know Sanders — and left a message with a secretary. Before long, he got a call back — Sanders wanted a meeting.

“I was surprised he said, 'Yes,'” Lockwood said. “When I first went to his office he said, ‘I have to admit to you this appeals to my ego.'’’

Sanders gave Lockwood a list of songs, mostly from Woody Guthrie and Pete Seeger, he would be willing to record.

The plan was for Sanders to sing relatively straightforward renditions of a handful of them. And that apparently seemed like a good idea to everyone. Until Sanders stepped into the recording booth for the first time.

“As talented of a guy as he is, he has absolutely not one musical bone in his body, and that became painfully obvious from the get-go,” Lockwood said. “This is a guy who couldn’t even tap his foot to music coming over the radio. No sense of melody. No sense of rhythm — the rhythm part surprised me, because he has good rhythm when he’s delivering a speech in public.”

So they had to come up with a plan B. Lockwood decided to turn the event into a “We Are The World"-style recording session: He called in a couple dozen Vermont musicians to serve as backup singers, while Bernie more or less read/preached the key lyrics with as much rhythm as he could muster.

Sanders spent several hours over a few days in the recording booth.

The resulting album was among the more popular ones that the label produced that year. They sold a few hundred cassette tapes at record stores throughout Vermont, Lockwood said — many to conservatives who bought them as gag gifts.

Lockwood, a Sanders supporter, said his personal favorite is, "This Land is Your Land." And while acknowledging the strangeness of the whole saga, he believes Sanders should be proud of his brief musical career.

“Part of it seems a little preachy now, but I think it's a pretty cool project,” Lockwood said. “I don’t see any reason why he would be embarrassed to have it out there. When you listen to what he’s saying, a lot of the message is exactly what he’s saying now — the one percenter stuff. Its been in his repertoire for a long time.”

Though Bernie and Lockwood were screwed out of the Grammy for album of the year by U2, their music may finally get the attention it deserves if Sanders runs for president: Lockwood said he is thinking about releasing the album on CD if Sanders declares.

Here’s hoping Lockwood goes through with it. Because to keep these musical treasures from the public wouldn’t just be a mistake. It would be, to use Bernie’s favorite term, an outrage.

Hear previews of the whole album:


Seven Days is on the Bernie Beat!

On his first day as mayor of the Queen City, Bernie Sanders shared a prediction with the alternative weekly Vanguard Press: “People will look back to Burlington, Vermont, 1981, and say: ‘It all started here.’” Socialist Sanders, who won the mayor’s seat by 10 votes, was likely envisioning some kind of populist revolution. Instead, what has turned out to be really popular is Bernie himself. Forty-three years and 18 elections after he first ran for U.S. Senate on the Liberty Union ticket, Vermont’s outspoken independent is seeking the Democratic nomination for president.

How did he get here from there? 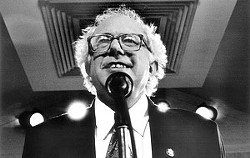 Seven Days lays it out on Bernie Beat, a new digital guide to Sanders’ colorful political career through the eyes of the state’s independent media. Original articles and video from more than 30 years of Bernie-watching puts the iconic public servant in context. A multimedia time line, combined with ongoing coverage of Vermont’s junior senator in D.C. and on the campaign trail, tells the real story of the outsider who would be president.