BTV Musicians Honor Bernie With 'This Land Is Your Land' 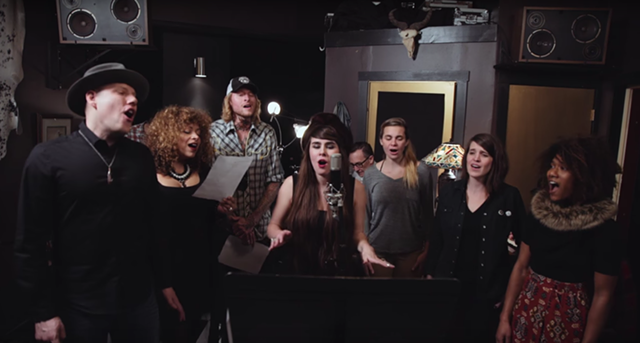 As anyone who has heard his 1987 folk album We Shall Overcome knows, singing ain't exactly Sen. Bernie Sanders' (I-Vt.) strong suit. Fortunately, he's got some tremendously talented constituents in his hometown who can lend his message a slightly less gruff and agitated voice.

Recently, an all-star collection of local Bernie-rooting singers and musicians joined forces at Burlington's Signal Kitchen, "We Are the World" style, to do exactly that, recording a soulful, gospel-inspired rendition of Sanders' favorite song, Woody Guthrie's iconic "This Land Is Your Land."

Rounding out the group are guitarists Lowell Thompson and Brett Hughes, the latter of whom organized the supergroup session with Wright and Bernie staffer Luis Calderin. Here's Hughes on how the project came together:

During many conversations with Luis Calderin, Bernie's Arts & Culture and Youth Vote coordinator, we discussed trying to build interest and participation in the campaign process around music and musicians, both from the local scene and nationally. He really wanted a version of "This Land Is Your Land" that felt like it was both updated and classic, and asked if Kat Wright and I could put together a version and pull in the musical community for a recording. The version that emerged came out of thinking about where the country is at the moment, and where we hope to see it moving toward. We wanted to add texture and dynamics as the song progresses, in the way that more people joining a movement add their voices and their energy.

If the apex of Bernie's movement is anywhere near as dynamic and moving as the climactic end of this tune — particularly the jaw-dropping interplay between Wright and Nelson — it would bode awfully well for his presidential hopes. Check it out: