Martha Hammond and her three daughters were among the roughly 200 people who gathered in Burlington on Friday afternoon for the Stop Line 3 March and Rally. Line 3 is a proposed oil pipeline expansion that would bring tar sands from Alberta, Canada, to Superior, Wisconsin, crossing Native American land and numerous bodies of water in Minnesota. The girls, ages 10, 6 and 4, each carried a hand-painted sign with a picture of a water bird: a loon, a trumpeter swan, a kingfisher.


Hammond, who lives in Shoreham, explained that she and her daughters are reading about the Native people who live in the pipeline region in Louise Erdrich’s series for young readers, “The Birchbark House.”

“It’s a land grab and it’s just terrible,” Hammond said. “We’re standing up in solidarity with the water protectors.”

From City Hall Park the group walked to Battery Park, stopping  at  branches of banks that fund the pipeline and chanting: “Stop Line 3” and “Stop the money pipeline.”

Drivers steering gas-guzzlers on Main Street honked and cheered in an apparent show of support. On Church Street, diners at outdoor tables halted mid-bite to snap photos of the marchers. Shoppers stepped aside to make room for protesters carrying signs that read “Declare Climate Emergency,” “For Water, For Treaties, For Climate,” and “Joe! Lead Us Not Leak Us.”

The marchers included a dozen people who walked in sync inside a long, slinky snake made from a black tablecloth and wire hoops.  The words "STOP LINE 3 TAR SANDS OIL PIPELINE" were printed in white on its side.

The snake served as both a metaphor for and a prophecy of the pipeline, said Jules Lees, a teacher who walked inside the snake. The last snake carrier in the line was Annie Boudreau, a University of Vermont student from Lake Elmore.

“I’m here today because I think everybody needs to be doing something,” Boudreau said. “Even if you’re not taking a leadership role, you need to show what you believe in.”

A similar message was delivered by environmental activist and author Bill McKibben at the rally at Battery Park. McKibben, who lives in Ripton, has been writing about climate change since the 1980s; he’s a founder of the global climate campaign 350.org.

“The planet is way outside its comfort zone, so we better get outside our comfort zones,” McKibben said, urging people to take action — such as demanding that banks “stop paying for the endless expansion of this fossil fuel empire.”

McKibben noted that if you’re going to get arrested, the lobby of a bank, furnished with comfortable chairs, is not a bad place for that to happen.

"Not until now," said a man drinking a Busch Lite at Battery Park. 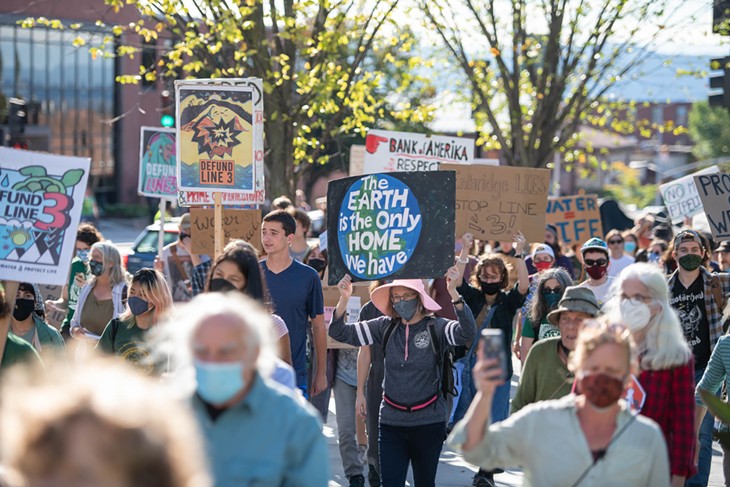 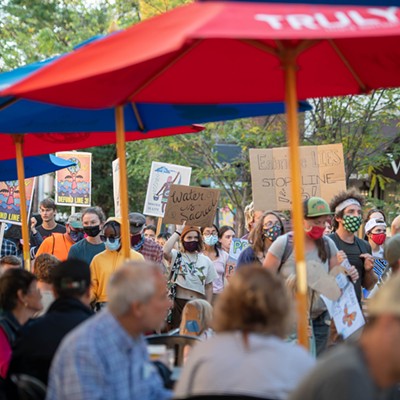 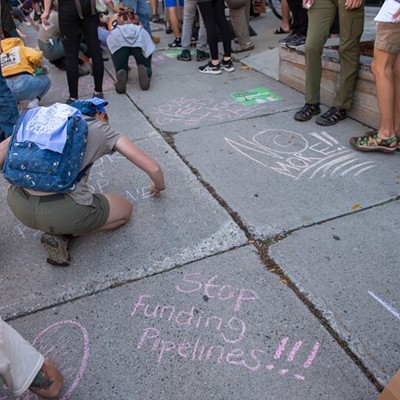 Slideshow: Scenes From the Burlington Stop Line 3 March and Rally
By Elizabeth M. Seyler
Click to View 17 slides
Prev
Next