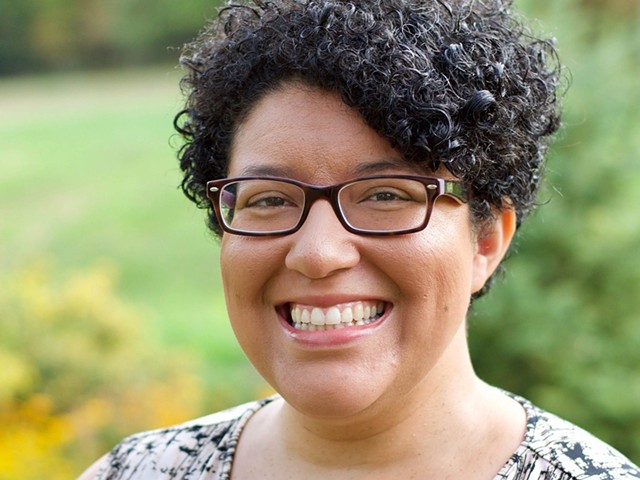 Montpelier's Kekla Magoon has been long-listed for the prestigious National Book Award for Young People's Literature for her forthcoming nonfiction book Revolution in Our Time: The Black Panther Party's Promise to the People. The author of children's and young adult titles such as The Rock and the River and the Robyn Hoodlum series, Magoon is a faculty member at the Vermont College of Fine Arts.

Revolution in Our Time, which will be released on Tuesday, November 23, traces the Black Panther Party through its social and historical contexts, from slavery to the group's inception in 1966 to today's ongoing anti-racist efforts.

"I've been working on this book for a long time," Magoon told Seven Days by phone.

Her first novel, 2009's The Rock and the River, is set in the late 1960s and deals with characters who are involved in the Black Panther Party and the Civil Rights Movement. She's been working on her forthcoming title ever since, publishing many novels, stories and other works along the way.

"[Teachers and librarians] kept coming to me, saying, 'My students read [The Rock and the River]; we're really intrigued by the history; where can we go to learn more about the Black Panther Party?'" Magoon recalled.

But she found no books for middle or high school students specifically focused on the group, though there were many biographies, autobiographies and thick, academic tomes written for adults.

"I was trying to bridge those [gaps] by writing something more accessible for a young audience that hopefully could be read by people of all ages," she said.

Magoon meticulously researched the book by visiting historical archives, libraries and museums all over the country, as well as reading many biographies and histories. She said she hopes her book will be one of many volumes that educators in Vermont and beyond use to teach history and current events, "taking the sort of standard kind of traditional American history narrative and looking at it from all of these different angles to try to understand how the different pieces fit together.

"It's a way of looking at American history through a specific lens," Magoon said of Revolution in Our Time. "I'm connecting through this book the history of all Black people in America ... in terms of still being in a place where we need change and growth and overturning of a lot of systemic practices that have kept Black people oppressed for a long time."
Magoon has already garnered many nominations and awards. She recently received the Margaret A. Edwards Award from the American Library Association for achievements spanning her career.

In June 2020, Magoon's essay "Our Modern Minstrelsy" appeared in the Horn Book, a venerable publication devoted to children's literature. In the piece, she delved into the concept of "literary blackface" — that is, the practice of white authors and the publishing industry creating or controlling inauthentic, often harmful narratives about Black people.

"As Black creators, even today, we are constantly, inevitably engaging with white expectations for how we portray Blackness," she wrote.

For a long time now, the publishing industry has expected books about Black people to have a certain tone, cover a certain ground and adhere to a particular narrative ... We are being asked to perform Blackness to the satisfaction of some mythical standard of believability while, at the same time, it has never stopped being OK for white creators to perform Blackness in any way that they choose.

"What if we skip the part where white writers magnanimously present the much-needed Black characters, and move straight to the part where the industry welcomes more Black creators?" she concluded.

Magoon plans to do a book signing on her release day at Bear Pond Books in Montpelier, her favorite bookstore.