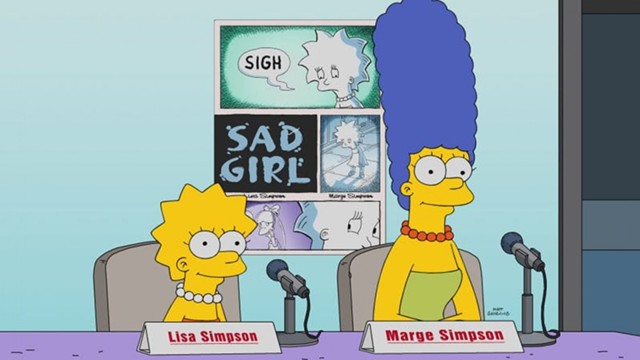 You know you've made it in the world of entertainment when you get drawn with yellow skin and four fingers. (Unless you're Jesus or God. Then you get five.)

Chalk up yet another comic coup for longtime Bolton resident Alison Bechdel. The 57-year-old Vermont Cartoonist Laureate and veteran Seven Days  contributor  is perhaps best known for her syndicated  comic strip, "Dykes to Watch Out For" and for her graphic novel, Fun Home: A Family Tragicomic. The latter was later adapted into a 2015 Tony Award-winning musical. (Find a review of the current Vermont Stage production in this week's issue of Seven Days.)

On Sunday night, Bechdel played herself as one of three female cartoonists — along with Roz Chast and Marjane Satrapi — spoofed in classic "Simpsons" style. The episode's title, "Springfield Splendor," is a riff on the late comic Harvey Pekar's "American Splendor."

In this episode of "The Simpsons," now in its 29th season, mother-and-daughter team Marge and Lisa turn a traumatic event from Lisa's past into a graphic novel titled Sad Girl. The episode also starred Tony Award-winning comedian Martin Short, who voiced the role of playwright Guthrie Frenel — past works include an all-dog version of the Broadway musical Cats and a version of Waiting for Godot, in which Godot actually appears — to adapt Lisa and Marge's Sad Girl for the stage, with disastrous consequences.
As today's Washington Post feature notes, the episode also pokes fun at the "Bechdel Test," which asks whether a work of fiction includes two women, identified by name, who talk to each other about a subject  unrelated to men. In the episode, as Bechdel (who portrays herself) explains the test, Marge tells Lisa that they must tell Homer about it.

Check out FOX's promo clip for the episode — which, unfortunately, doesn't include Bechdel herself — below.