The 72nd Venice Film Festival kicked off on Wednesday with pomp, circumstance and stars in designer gowns. The Italian glamour feels pretty distant from Vermont, but this year's festival has special significance for one Newfane resident — novelist Castle Freeman Jr. A film based on his novel Go With Me will premiere in Venice on Friday, September 11, in the festival's Out of Competition section.

The movie stars heavy hitters — Julia Stiles, Ray Liotta and, last but not least, Sir Anthony Hopkins. The director is Daniel Alfredson, known for helming the Swedish films based on the two sequels to The Girl With the Dragon Tattoo.

What attracted the stars to this story? Published in 2008, Go With Me is a slim suspense novel set in a remote part of rural Vermont. Its prose is terse and dialogue heavy; its story takes place over just 24 hours. It begins when a young woman named Lillian (Stiles) drives up to the sheriff's office with a dead cat in her car. She has run afoul of Blackway, a fellow locally notorious for being someone you don't cross. The sheriff won't put his neck out for Lillian — but he will direct her to someone who might. Or to a mismatched pair of someones: a wily old logger (Hopkins) and a none-too-bright young one (Alexander Ludwig).

The setup suggests a classic western, as Alfredson points out in his festival director's note: "It has all the ingredients: good people, bad people, and a tough point of no return. And it’s totally without any 'soft' spots."

And, I would add, the novel has the virtue of being both dark and witty, rather than ponderous. In my review, I wrote that Go With Me "has the buoyancy of a well-told folktale; it’s easy to absorb and hard to forget."

You can see an exclusive clip from the film here.

Freeman will appear on Sunday, October 4, at the Brattleboro Literary Festival. He's the author of five novels, including a new one, The Devil in the Valley, which will be out on October 5. A Texas native, Freeman talked to Seven Days about how his move to Vermont helped kick-start his writing career in this interview from our 2012 Reading Issue.

Go With Me doesn't yet have a U.S. distributor, so there's no telling when we'll see it in local theaters. For now, I emailed Freeman a few questions about seeing his book become a film.

SEVEN DAYS: What can you tell me about the book-to-film process? I know it's a long haul, but anything you want to share.

CASTLE FREEMAN JR.: A long haul it is — in this case, when the movie of Go With Me gets into general release, it will have been at least eight years in development. The book was originally published by Steerforth Press in Hanover, N.H., in early 2008. It got quite spectacular reviews, including prepublication reviews and praise from the kinds of review media I had not heard from in the past: People, Entertainment Weekly, USA Today, the Wall Street Journal, NPR, etc.

Turns out they read reviews in California, too, and Steerforth and I began getting calls from movie and TV production companies. Steerforth had not contracted for a role in selling film and TV rights, so the approaches came to me. Fortunately for me, I have a younger cousin who is an agent in Hollywood. I hadn't been in touch with him in some years, but I soon remedied that. My cousin, Lindsay Williams, took on the project and pushed it tirelessly and with great skill. He is really the main reason the movie exists.

I should say he's one of the main reasons. Another is Anthony Hopkins, who (I'm not sure how) found the book, read it, liked it and joined in the project of getting it on film. That was in late 2011. At that point, the screenplay was in hand, but no cast or director had come along who could get the bankers interested. Sir Anthony took care of that. Since his advent, things have moved along pretty steadily, though still not exactly at bullet speed.

Delay is expected, I guess. I have learned that young writers in Hollywood are urged to cut out tobacco, alcohol and other drugs, to eat a good diet, get plenty of exercise, and in general to live a very healthy life. If they do those things, they may (MAY) still be alive when their Deal Goes Through. 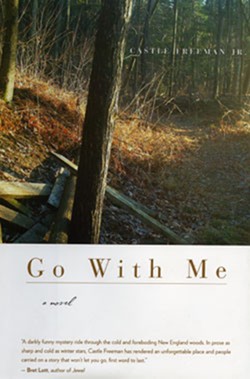 SD: Did you visit the set?
CF: My wife, Alice, and I were invited to visit the set in the Canadian Rockies last December, but we decided it was a long, complex, expensive trip. No Vermonter needs to cross the continent to freeze in the woods in December. We can do that at home.

SD: Did you work with the screenwriters [Joe Gangemi and Gregory Jacobs] on the adaptation?
CF: I was in touch with the screenwriters, but not much. They had some questions about details of the rural setting, but only a couple and nothing profound. Some years back, I read an early iteration of the screenplay, but nothing since then.

SD: How do you feel about the change of setting from Vermont to the Pacific Northwest?
CF: I guess I wish the film could have been made here, but really I've never thought the location was that important. The movie people know what they're doing, I'm sure. (Interestingly, some of the photos I have seen from the film make the country look a little like Windham County.)

SD: Do you think people hope the movie will be part of the "awards conversation," or is it too early to say?
CF: Not sure. Go With Me has been selected for screening at the Venice Film Festival next week, and at the San Diego Film Festival at the end of this month. That level of acceptance would seem to help with the film industry's awards, but how and how much I don't know enough to say.