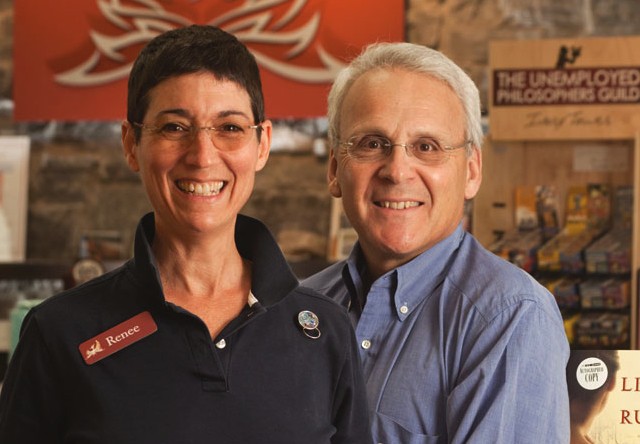 The revitalization of downtown Rutland has just taken a literary turn. The owners of Phoenix Books, the independent bookseller with locations in Essex and downtown Burlington, have just announced that they'll open a third store in the Marble City.

The Downtown Rutland Association, in partnership with Green Mountain Power and other entities devoted to revitalizing the city's downtown, actively recruited Phoenix Books to set up shop in Rutland. "It was quite flattering," says Michael DeSanto, who co-owns Phoenix with his wife, Renée Reiner. "We've opened two bookstores in recent years, and nobody ever asked me to do it."

Though Phoenix has not yet chosen a new storefront location, DeSanto says the store will be located in the hub of Rutland's downtown, at or near the intersection of Center Street and Merchants Row. He hopes it will open by June 1.
Steve Costello, vice president for generation and energy innovation at Green Mountain Power, says that Rutland's lack of a store selling new books was "an obvious hole" in the economic and social texture of the city. "We had a study conducted of underserved markets for the downtown, and 'bookstores' was right at the top of the list," he says.

DeSanto calls himself "a true Rutland booster," and says that he's been impressed by civic leaders' sincere passion for their city's revitalization. "They've worked really hard to get that city moving again. Everyone from the mayor [Chris Louras] on down has done a terrific job," he says.

Though he insists he's not "a paragon of virtue," DeSanto is nonetheless interested in opening a Rutland location in part because the store will present new opportunities for community involvement. Phoenix's two current locations hold more than 50 book-related events between them every year, he notes. Moreover, DeSanto says, the stores have taken part in local charity events; he refers to recent donations to two different food drives. "You can't get Amazon to give money and collect food," he says, "but you can get local companies and businesses to do it, and that's what we pride ourselves on doing. We think Rutland will get behind that kind of thing."

DeSanto and Reiner opened Phoenix Books Burlington on a "community-supported enterprise" model, and it looks like something similar will happen in Rutland. According to Green Mountain Outlook, "GMP has enlisted more than 50 local businesses and residents who have pledged to pre-buy $1,000 worth of books each."

As part of its commitment to assist with Rutland's revitalization, GMP has taken an active role in recruiting companies to relocate to the city. The power company was instrumental in the opening of the Rutland branch of Small Dog Electronics, and has recruited several solar companies in an effort to turn Rutland into a "solar city." GMP has a new downtown location of its own, in the site of a former department store that had been unoccupied for nearly a decade.

"Bookstores, to me, are a lot more than a real estate outlet," says Costello. "They're a place where people congregate. [People speak of] having home, work, and then there's that 'third place.' A bookstore can be that. In this community right now, the options are the internet, driving somewhere else or a small used bookstore, but there's no place there to sit in a chair and peruse a book before you decide to buy it."