What I'm Watching: The Telegraph Trail

For a dollar or two at a recent library sale, I picked up a DVD that contains not one, not two, but three feature-length (well, sort of) John Wayne films from 1933: The Man from Monterey, Somewhere in Sonora (both directed by Mack V. Wright) and The Telegraph Trail (directed by Tenny Wright, who may or may not have been related to Mack V.). I knew that these would be resolutely average, run-of-the-mill westerns, and that's why I purchased the disc. You can learn a lot from exceedingly average movies.

My viewing of The Telegraph Trail confirmed my expectations: It was solidly average, with few if any outstanding features. Which is why I liked it. The film is one of the 11 (!) movies that John Wayne made in 1933, back before he graduated to "A" pictures. These three films are most assuredly "B" westerns of the type made in great number from the 1910s through the 1960s, and are entirely typical of that form. By which I mean: They are all in the neighborhood of 60 minutes in running time (just barely feature-length); they were directed by workmanlike filmmakers with little, if any, personal style; they abide by — and indeed define — the typical narrative patterns of the genre; and they were made for relatively small budgets.

Though of course studios were only too happy to make a little money on them, B pictures' (I'm dropping the quotes from here on in) chief job was to serve as "loss leaders." That is, since they always showed as the first half of a double feature (on a program that typically also included cartoons, newsreels and other shorts), they were intended as "a little extra" that you'd get with the admission you paid to see the A picture that was the double feature's other half. B pictures, like the shorts and cartoons that accompanied them, were like little gifts from the studios to ticket-buyers. But they came with a cost: They were intended to get viewers excited about new stars and new movies. These days, we'd say that they were also intended to create "brand awareness" for the studios.

(Interestingly, these films were produced for Warner Bros. by Leon Schlesinger, who would gain greater renown as the producer of that studio's Looney Tunes and Merrie Melodies cartoon series. So it's a good bet that, when patrons saw The Telegraph Trail in theaters in 1933, they also saw a short film or two that, like this particular western, was produced by Schlesinger.) 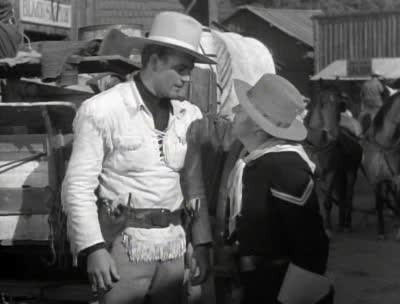 B films served as "proving grounds" for stars, directors, writers and other creative personnel — John Wayne is the perfect example of someone who made the leap from B to A. Wayne certainly paid his dues in the bush leagues before breaking big in the late 1930s: He made dozens of B films before his name earned a place above his films' titles. In this regard, such films represent a forum for the studios to take chances by casting an up-and-coming star in his or her own low-budget vehicle. If the film didn't get favorable notices, then perhaps that actor would not move up to A pictures, and it didn't cost the studios very much to gain that valuable demographic information.

One regard in which B pictures did not take many chances, though, was in crafting their stories. Many B films are genre films because genre provides a generalized narrative framework; in many cases — and that of westerns may be the plainest — narrative embellishment was unnecessary and even unwelcome. Couple that with these films' sub-60-minute running times, and they left little room for narrative explorations of any kind.

Indeed, many of these films, including The Telegraph Trail, are not only narratively uncomplicated, but take all kinds of short cuts of precisely the kind that A films tend to avoid. The Telegraph Trail provides some excellent examples.

One hallmark of A pictures (and of the texts in the top ranks of mainstream popular entertainment in general) is that their stories minimize coincidence. Narratively important events don't just happen randomly when, say, two characters cross on a busy street, or when a long-lost daughter just happens to take up residence in a boarding house run by her estranged mother. Rather, in A pictures, all major story events are justified by characters' psychologies and previous actions; explicable, noncoincidental causation is king. When the Denzel Washington character takes out a bunch of baddies at the end of The Equalizer, it's not because they just happened to be in the same place at the same time. It's because he lured them there with the intention of killing them, using the skills he developed as a bad-ass secret-ops dude.

At least two major narrative events in The Telegraph Trail occur by pure coincidence, and these events, more than any of the other characteristics of the film, are the surest marks of the B film.

The first such event occurs when, to avoid the untoward advances by the nefarious Gus Lynch, the lovely Alice Keller purports to be engaged to a man whom she glimpses in a nearby photograph. That man, John Trent (Wayne), happens to walk into Alice's uncle's general store mere moments later, thus giving Alice a very convenient opportunity to act the part of a devoted fiancée. Trent is puzzled by the affections of Alice, whom he'd never met before, but he manages to hold it together long enough for Lynch to be temporarily restrained.

Unless played for laughs in a comedy (a special case: comedy gets to make fun of generic conventions in forging its own conventions), such a happenstance would likely not fly in an A film. The incredible coincidence is simply too unbelievable, and that unbelievability shatters the narrative verisimilitude that is so important to most A films.

The other coincidence is even more obvious: Alice just happens to be at a window when Lynch discusses with a henchman his upcoming plans to hijack a shipment of dry goods. (She then makes efforts to inform Trent and his men of this piece of news.) There's no narrative reason for Alice to be at the window — she's just there, looking outside. Similarly, there's no reason for the two men to discuss the raid at that particular spot on the street; indeed, especially since Lynch is shown to be connivingly clever, it would make more sense for such plans to be discussed in a clandestine location. But, in the interests of narrative economy, of maintaining a short running time and of keeping costs down (i.e., by not having to shoot another scene in a new location), the conversation takes place beside an open window on the main street of a town.

The convenient way in which Alice overhears the most important information would, if found in an A picture, surely be deemed sloppy storytelling — as it would indeed be. Here in B World, though, it's just part and parcel of how narratives advance. In this type of filmmaking, it's not only not sloppy, it's expected and even necessary.

Different types of films necessitate different types of storytelling. If you happen to watch The Telegraph Trail, or any one of the readily available tens of thousands of Hollywood B westerns, you'd do well to take these films on their own narrative terms. Understanding their place in history helps us understand their storytelling quirks.