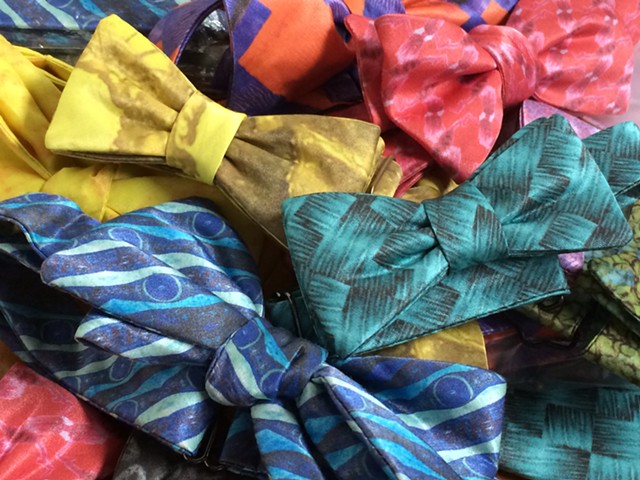 Since September 2013, Ariele Faber has been fusing her background in laboratory science with a passion for art and design through Cerebella Design, the "digital surface design" company she launched while still enrolled at Middlebury College.

The 24-year-old creates scarves, neck ties and bow ties in striking, colorful fabrics that she designs using images of the surfaces of microscopic organisms taken through a microscope lens (called "photomicrographs"). She uses digital printers to transfer these onto organic cotton or imported silk fabrics. The results: abstract, geometric patterns that one would hardly guess came from microscopic pictures of frog skin, pollen tetrads, tapeworms and other organisms.

“Often, we look at slides under a microscope as a way to observe something that will produce data and support a hypothesis,” Faber writes on her website. “However, as a person passionate about science and art, I am equally awestruck by the colors, patterns, textures, and sense of order that can be observed on such a small scale.”

The motto of Cerebella Design is “Where scientists are artists,” and that statement has become especially true since Faber recently launched Cerebella Submit, an online crowd-sourcing platform. Scientists anywhere can use it to share microphotographs from their labs, three to five of which will be selected four times a year to inspire new Cerebella products.

“It’s been in the works since we launched last year,” says Faber. “The concept behind it was to shift the business model after year one, from one where I was doing all the science imaging internally to actually crowd-sourcing images, which allows scientists to bring images from their labs into a totally new space.”

The platform launched at the end of September, in time for Cerebella’s one-year anniversary. And Faber hired her first employee, a New York City-based recent college grad named Lucy Partman, to help comb through the submitted graphics.

Partman’s role, according to Faber, is to select the images and help create accompanying literature that makes “science more accessible through what we see, and through the research and the stories behind the images.”

Submissions have already poured in from research institutions like Harvard and the Massachusetts and Rochester Institutes of Technology. The innovative concept landed Cerebella a write-up in the New York Times’ science section right after its launch.

Cerebella will release the first batch of products inspired by crowd-sourced images in early November.