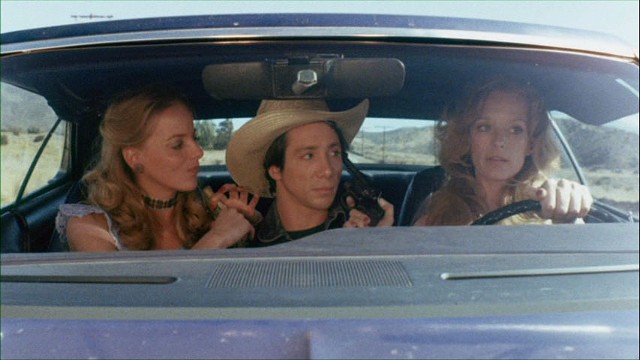 For my 18th birthday, my uncle, to whom I owe much of my love for movies, gave me Danny Peary’s classic 1981 book Cult Movies: The Classics, the Sleepers, the Weird, and the Wonderful. In that book (the first in a series of three), the author writes short essays on 100 films that had, according to him, earned a place in the cult canon.

The book became a bible of sorts for me, an introduction to all kinds of movies that would become important to me: The Girl Can’t Help It; Aguirre, the Wrath of God; I Walked With a Zombie; Shock Corridor; The Tall T; The Warriors; Two-Lane Blacktop and many others. Though the cult canon has changed a lot since 1981, and though Peary has a distinct preference for postwar American films, the book was still a great primer on the many ways in which films could be odd.

So of course I sought out Cult Movies 2. As I had in its predecessor’s table of contents, I put a little black dot next to the title of each film after I’d seen it. Both books are pretty heavily dotted now. It was always a great thrill to be able to mark off another of Peary’s selected films.

I remember marking off, for example, the 1976 film The Great Texas Dynamite Chase at some point in high school, when cable television was still pretty weird. I was introduced to the film by "Joe Bob Briggs’ Drive-In Theater," the Movie Channel show that he hosted for years and that was responsible for a great deal of my cinematic education. (Joe Bob remains one of my film heroes and is a major reason why I dedicated my academic studies to film.) I’m sure that the film played at 2 a.m. on some weekday. I was usually pretty groggy for my first-period classes.

The Great Texas Dynamite Chase, to the extent it’s remembered at all, is known for any one of three things. First, that it stars Claudia Jennings, the 1970 Playmate of the Year who died in a car wreck in 1979. Second, that it was produced by New World Pictures, the quasi-studio presided over by Roger Corman, the master of American exploitation pictures. And, finally, that the film is often cited as the inspiration for Ridley Scott’s 1991 film Thelma & Louise.

Jennings really was a pretty talented actress. In The Great Texas Dynamite Chase (also known as Dynamite Women; exploitation films often have multiple titles), her performance is naturalistic and easygoing — as is that of costar Jocelyn Jones, daughter of the great character actor Henry Jones.


For a time in the early to mid-’70s, Jennings had carved out a nice niche for herself as a successful and popular B-movie actress. She’s quite good in Moonshine County Express and Unholy Rollers (two other Corman-produced films), among others, and built up a strong fanbase. That was no easy task in the 1970s for a woman who first gained fame by posing nude.

The premise of The Great Texas Dynamite Chase is simple, like those of many other Corman films. Candy breaks out of jail and, with nothing to lose, gets right back to robbing banks — with the help of dynamite. Ellie Jo (Jones), sick of the men in her life and her crappy job as a bank teller, takes up with Candy mid-robbery and never looks back. As the gal pals dynamite-rob bank after bank across Texas, they pick up a young man named Slim, who joins them on their spree.

The parallels to Thelma & Louise are pretty straightforward.

By definition, exploitation films emphasize thrills and “attractions” over narrative coherence. And it’s not that The Great Texas Dynamite Chase is incoherent; but it certainly places a very small, perhaps nonexistent, premium on character development and causation. We never learn why Candy robs banks, or even why she prefers to use dynamite. Similarly, Slim joins the ladies simply because he has nothing better to do, not because of any particular goals or desires.

I imply no value judgment here. This is storytelling of a different type, not a better or worse type than that of mainstream Hollywood films. What The Great Texas Dynamite Chase “lacks” in character development and plot motivation it makes up in action, explosions and nudity. (There’s also a cameo by Bart Braverman, though this is perhaps an attraction of a lesser kind.) 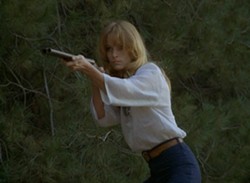 It’s not the presence of action, explosions or nudity that differentiates exploitation films from mainstream films; the latter unapologetically brim with such ingredients. There’s no more emphasis on exploding cars in The Great Texas Dynamite Chase than in, say, any of the Die Hard movies. The differences between the two types of films lie in their respective narrative methods. One is generally tight, coherent and clear; the other is generally episodic and less concerned with causation.

In this way, exploitation films have much in common with art films (which famously depict causeless events); avant-garde films (many of which dispense with narrative altogether); and even much pornography (which is usually only lightly plotted, if at all). So even though The Great Texas Dynamite Chase may seem, when compared to mainstream Hollywood films, like something of an outlier, there are probably more films like it than unlike it.