Police: Man Shot Wife, Dismembered Her Body Inside Their Camper | Off Message

Police: Man Shot Wife, Dismembered Her Body Inside Their Camper

A man told cops he shot his wife twice in the head in Bolton before cutting up her body inside their camper van.

New details of 22-year-old Emily Ferlazzo’s death were unveiled in court documents on Wednesday after her husband, Joseph Ferlazzo, 41, was arraigned in Burlington. Wearing a painter’s coverall and blue latex gloves, Joseph appeared by video in Judge Gregory Rainville’s courtroom, where he pleaded not guilty to a first-degree murder charge.

Citing the “great weight of evidence,” Rainville ordered Joseph held without bail pending another hearing in the coming weeks. He has no prior criminal record, prosecutors said.

An affidavit from Vermont State Police Det. Sgt. James Vooris became public in court Wednesday, and lays out what police believe happened, based on Joseph's confession and other interviews.

The couple had driven from New Hampshire to Bolton on Friday night to celebrate their first wedding anniversary, family members told police. Joseph’s sister and boyfriend had an Airbnb at Bolton Valley Resort, and the Ferlazzos parked their camper, in which they lived, outside. 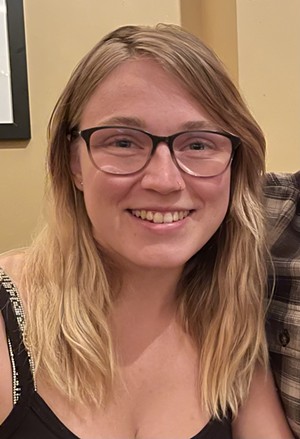 The couple argued inside the vehicle; it eventually became physical. At one point, Emily lay down on the bed. Joseph then waited about five to 10 minutes and grabbed a handgun from a cabinet. He told police he "jumped on top of her" and fired twice into her head, the affidavit says.

Joseph said he began to have an anxiety attack, then moved her body to a bathroom area in the camper. The next morning, Joseph went out to breakfast with his sister and her boyfriend in Waterbury, leaving Emily’s body in the bathroom all the while, the affidavit says.

After breakfast, Joseph took the camper to a friend’s house in St. Albans. There, Joseph used a hand saw to “cut Emily’s feet, legs, arms, and head from her body,” the affidavit says. He put the body parts in garbage bags and left them in the camper, he told police.

The affidavit does not detail what Joseph did for the next few days. But at some point, he left the camper in St. Albans. He showed up around 6 p.m. Monday
at Emily's mom and stepfather’s property, where he and Emily lived in the van. He told her parents that they’d been in a fight, she’d gotten out of the vehicle, and she said she’d Uber home to New Hampshire. Joseph told them he hadn’t seen her since.

Her parents called police to report Emily missing while Joseph took his Jeep and drove back to Vermont, the family members told cops.

Just after midnight Tuesday morning, a friend of Joseph’s in St. Albans called 911 to report that Joseph had admitted to killing Emily as they talked in the friend's car. The friend kicked Joseph out of his car and called authorities.

Later that afternoon, a Vermont State Police detective sergeant spotted Joseph at a St. Albans gas station and brought him back to the barracks. Under questioning, he confessed.

Cops searched the van on Tuesday and found eight garbage bags, including one with “a severed human leg which was missing the foot,” the affidavit says. Police also found a handgun and a saw inside the van.

Asked about domestic violence after Joseph’s arraignment, Chittenden County State’s Attorney Sarah George told reporters that “the reality is, this is not uncommon.

“Thousands of women a year are killed by their partners,” George said. “And most of the time, there is some history of violence between them.”