Students and staff from the Champlain Valley School District organized the event. It included a march from Champlain Valley Union High School to a celebration at Hinesburg Community School, complete with speeches, pride-themed art and ice cream.  Marchers carried signs that announced, "We embrace and celebrate you. You are amazing!" and "Hinesburg LGBTQ+ Pride."

“We wanted to show our support for people in our community that don’t always feel it,” Samantha Raymond said. She's a rising junior at CVU who helped emcee the event. 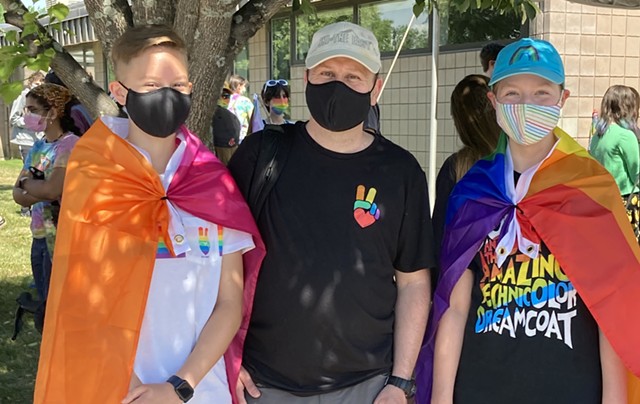 “When I look out here today, I feel accepted and supported," said another youth at the rally, who is a rising ninth-grader. "And that is how everyone should feel all the time.”

Two recent anti-LGBTQ incidents in Hinesburg prompted the event. In April, Hinesburg Fire Chief Al Barber came under fire after he shared a homophobic meme on his Facebook page. (After issuing an apology that some criticized as inadequate, he announced he would retire from the position on July 1.) And in May, LGBTQ-affirming chalk drawings created by HCS students were vandalized in a possible hate crime.

After the latter incident, students at both schools held visibility events to show that they weren’t afraid. “What the students said is, we need to make sure we’re not just responding to these events. We need to have a celebration,” Peter Langella, the CVU librarian and adviser to the school's Gender and Sexuality Alliance, said.

The crowd included dozens of kids of all ages, parents, school staff and community members. Some elected officials were also on hand, including Lt. Gov. Molly Gray and several state legislators. The event even drew people from neighboring towns in search of small-town LGBTQ community.

Kylle Kolk of St. Albans said it was her first-ever pride event, even though she has been part of the LGBTQ community for years. “It’s good to see all these kids being able to be themselves,” she said.

Rep. Bill Lippert (D-Hinesburg) who has represented the town in the Vermont House for 27 years as an out gay man, agreed.

“The recent defacement of art is very disappointing, but I don’t think it represents the community," he told Seven Days. "I think the turnout today is a big statement of support,” he said.

Having been involved in gay rights activism for most of his adult life, he was excited to finally be part of a pride parade in his own town, Lippert said. He commended the students for making it happen.

“This is the world we were working to create, where young people are free to be who they are,” he said.