Vermont Students Walk Out to Protest Anti-LGBTQ Measures | Off Message

At 1 p.m. sharp on Friday, the front doors of Burlington High School’s downtown campus flew open and about 90 percent of the students stepped outside.

Joined by 150 students and faculty from Edmunds Middle School, the large group marched down Cherry Street. They ended up on the steps of City Hall on Church Street, where they rallied with city officials, school staff and administrators, including Mayor Miro Weinberger and Superintendent Tom Flanagan.

The crowd joined high schools across the country participating in a national walkout to support LGBTQ youth and stand against anti-LGBTQ legislation, youth education and health care policy in Florida and Texas. The Queer Youth Assemble, which is based in New England, called for the national walkouts a week ago.

Sawyer Totten, a senior at Burlington High School and co-leader of his school’s Gender and Sexuality Alliance, helped organize the walkout. He hopes the nationwide events will send a message to states “trying to pass these laws that we are united and will stand behind each other and fight for each other.”

On Friday, the 13 members of the Vermont General Assembly's Rainbow Caucus released a statement saying that they stand in solidarity with Vermont youth to oppose anti-LGBTQ legislation and health care policy.

Charlie McCaffrey, a junior at Montpelier High School, helped organize the school’s walkout, which culminated at the Statehouse. McCaffrey estimated that 50 students participated. The Rainbow Caucus invited the students to the Statehouse to speak with legislators.

“I was flabbergasted by the show of support and the welcoming by the legislators," McCaffrey said afterwards. "They were making sure that we knew that Vermont was standing by us 100 percent, doing everything they can to stand by youth in this moment of crisis." 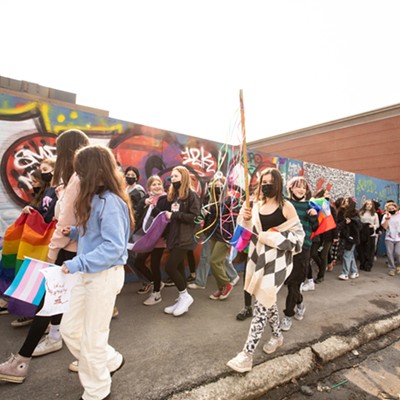 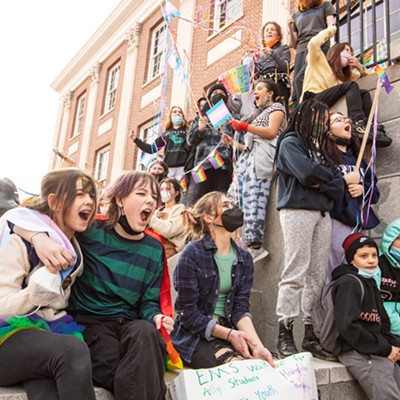 “It was really empowering to see how many people were passionate about trans rights,” Donahey said afterwards.


According to V Pearson from Outright Vermont, a Burlington-based nonprofit that supports LGBTQ youth in Vermont, at least 15 high schools across the state organized walkouts to stand “in solidarity with youth around the country threatened with laws that would make them less safe and increase impunity from queer and trans antagonism.”

Outright Vermont hosted an online meeting on Wednesday to provide youth organizers support to mobilize a walkout. They also planned to host a virtual walkout for those unable to participate in person.

“Our work as adults is to support youth moves to say no more to these ridiculous and harmful laws," Pearson said in an email. "In Vermont, we have protections and have visible queer and trans leaders who can stand against this national tide. These walkouts are acts of solidarity and care — a long distance ‘Heck Yeah, we are with you’— to youth around the country who may be feeling alone and scared about what the future holds.”
Prev
Next