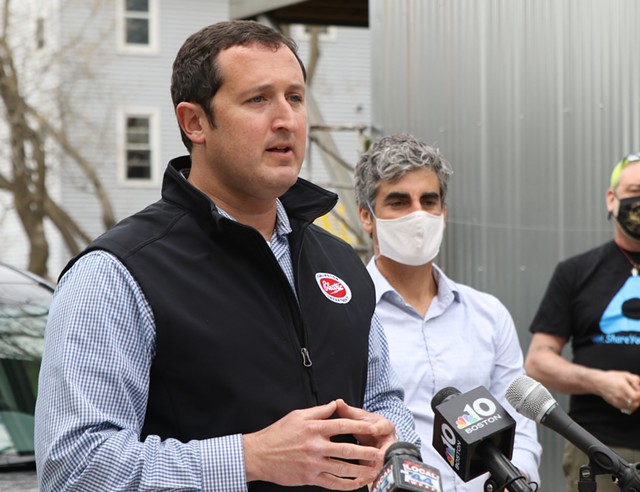 The Burlington City Council on Monday approved a 7.5 percent rate increase for Burlington Electric customers, the first rate hike since 2009.

Burlington Electric Department general manager Darren Springer said the rate increase — which the state's Public Utility Commission also must approve — will make up for revenue lost during the coronavirus pandemic. The department brought in $2.1 million less in sales than was budgeted for during the current fiscal year and is owed more than $1.3 million in unpaid customer bills. Expenses next year are expected to be 8.5 percent more than the current year, according to Springer.

The average residential customer’s bill will go up $4.92 per month; low- to moderate-income customers are expected to pay an additional $4.27 a month.

Customers will see the new charges on their August bills.

"We understand the challenge of the moment for the community, and we definitely view a rate increase as a last resort," Springer said.

Councilor Ali Dieng (I-Ward 7) cast the lone no vote on the proposal.

Even with the increase, Burlington’s proposed residential rates are 11.5 percent lower than the average Vermont rate, according to the department. Commercial rates, however, are slightly higher than the Vermont average. Most business customers will pay about $6.60 more a month.

Kelly Devine, the executive director of the Burlington Business Association, urged the council to postpone the rate increases as businesses continue to recover from losses suffered during the pandemic. The hike may be justified, but “it really could not be coming at a worse time for our community,” she said.

“We have a lot of small businesses in Burlington. They have had the most challenging year imaginable,” Devine said. “We already expect businesses to barely make it through this summer, because they don't have any money in the bank. Most of them are working on borrowed time.”

Springer acknowledged the hardships faced by both residents and business owners. He said the department will offer monthly bill credits to customers whose incomes are at or below 185 percent of federal poverty levels. The program is expected to help 1,300 customers.


Gabrielle Stebbins, chair of the Board of Electric Commissioners, said during the meeting's public comment session that the department checked "under every rock" to find other cuts before proposing the rate increase.

"We took 12 years of no rate increase, and pretty much nothing else in life doesn't increase over 12 years," she said. "But at this point, with the pandemic and the losses that we've seen, we do need to make this critical move."

Under the new rates, the average single-family residential customer will pay about the same in fiscal year 2022 as they did this year. Costs for the average duplex and triplex will decrease, as will bills for certain low-income customers enrolled in the department's Water Resources Assistance Program.

Commercial properties, on average, will pay a 9 percent increase.

Earlier in the meeting, councilors said goodbye to one of their own when they unanimously voted to appoint Councilor Brian Pine (P-Ward 3) as director of the city’s Community and Economic Development Office.

Brian Pine to Lead Burlington's Community and Economic Development Office
By Courtney Lamdin
Off Message
Pine, who previously worked for CEDO for nearly 18 years, will start on the job June 7. He stepped away from his council duties immediately after the vote, leaving the 12-member council one short until a special election on August 17.

Pine’s colleagues showered him with praise.

“As long as I've known you, this was a position that I've always felt you were destined to have,” Councilor Karen Paul (D-Ward 6) said. “I'm glad that that has happened for you and for the city.”

Pine’s departure creates an opening on the council, one the Progressives are eager to keep in order to maintain their numeric majority. The Vermont Progressive Party and Burlington Democratic Committee are both expected to hold nominating caucuses ahead of the election. The victor will serve the rest of Pine’s term, which ends next March.

At least two candidates have already jumped in the race: Owen Milne and Ryan Addario plan to seek both the Progressive and Democratic nominations, they each told Seven Days on Monday.

Milne is the executive director of the Lake Champlain Community Sailing Center and has lived in Burlington for seven years. Milne said he hadn't considered running for council until a few weeks ago, when Pine called Milne about his new job and suggested Milne someday consider public service. Milne supported Pine in the Progressive mayoral caucus last December over City Council President Max Tracy (P-Ward 2).

Pine and Tracy Make Their Pitches at Progressive Party Caucus
By Courtney Lamdin
Off Message
Addario moved to Burlington from New York City eight years ago and works as the development and marketing coordinator for the Lyric Theatre Company. Addario considers himself a lifelong Democrat but said he has supported both Democrats and Progressives in Burlington, including Pine in the mayoral caucus.

“I think it’s entirely possible — and I think it's really helpful — to be able to be flexible,” Addario said, noting that Burlington politicos’ insistence on party labels “is confounding to me.”

Milne, too, says he’s more loyal to people than party. “The place that I will fall politically will mirror where the direction is of Ward 3,” he said.

Pine’s last act as a councilor was introducing a resolution to expand youth membership on city boards and commissions. It passed unanimously.

Burlington youth can now serve on a handful of city boards, including the Church Street Marketplace Commission, Board of Health, Electric Light Commission and Public Works Commission. Youth have been allowed to serve on boards since 2003 and even have full voting rights in some of the groups.

Clarification, May 25, 2021: The current version of this story more specifically describes the conversation between Milne and Pine.
Prev
Next