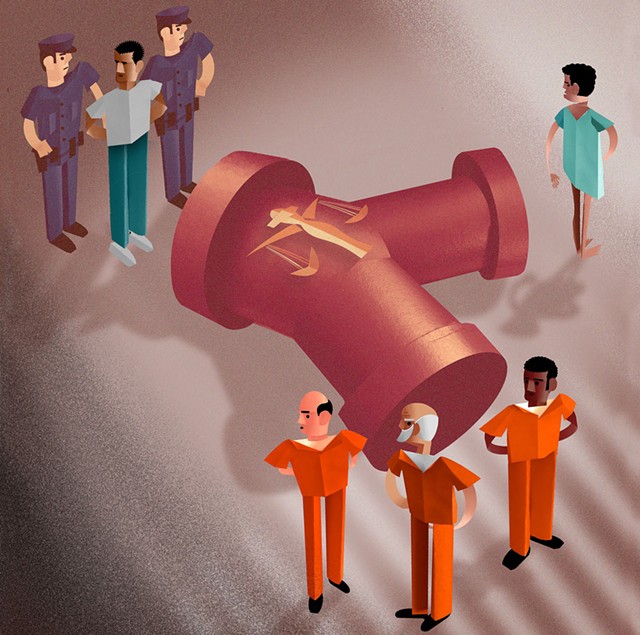 A mentally ill woman who shot a gun instructor in 2015 pleaded guilty to federal gun charges on Tuesday, the first step in a complex plea deal that would see Veronica Lewis serve 10 years in prison for attempted murder.

The guilty plea comes in conjunction with Vermont Attorney General T.J. Donovan's decision to refile state charges against Lewis last month. She is accused of stealing instructor Darryl Montague's .22-caliber revolver during a lesson at his Westford gun range and shooting him multiple times.

Lewis' prosecution became a political lightning rod in 2019, when Chittenden County State's Attorney Sarah George decided to drop the case against Lewis and defendants in two murder cases. In doing so, the reform-minded George cited determinations by state and defense experts that Lewis, 36, was insane at the time of the shooting and needed ongoing treatment.

That deal, should Reiss accept it at a May sentencing hearing, is contingent upon a separate plea agreement in state court and would run concurrently with it.

The state agreement calls for Lewis to plead guilty to second-degree attempted murder in exchange for 20 years to life in prison. All but 10 years would be suspended; Lewis would then serve 40 years on probation.

Feds Charge Gun Range Shooter After State's Attorney Drops Case
By Derek Brouwer
Off Message
The proposed deal also credits Lewis for time served in prison stretching back to June of 2015, meaning she could be released in 2025.

Lewis is scheduled to enter a plea on the state charge on Thursday.

At Tuesday's hearing, Assistant U.S. Attorney Jonathan Ophardt said a forensic psychologist with the U.S. Bureau of Prisons evaluated Lewis last year and concluded that she was suffering from a mental disease at the time of the crime, but that it didn't impair her ability to "appreciate the wrongfulness of her conduct."

During her time in Chittenden Regional Correctional Facility awaiting trial the first time around, Lewis racked up a series of assaultive charges for lashing out at prisoners, guards and a forensic psychologist. Her state public defender, Jessica Brown, previously criticized the move to bring new charges against her client, arguing that the safest setting for Lewis was a psychiatric hospital, where she could receive therapeutic treatment, not a jail.

How Veronica Lewis Went From Jail to a Mental Hospital — and Back Again
By Derek Brouwer
Crime
Brown said Tuesday the plea agreements are structured so that Lewis would spend most or all of her remaining sentence at a federal prison, where conditions "are probably slightly more humane" than at the state's only prison for women. She declined to comment on the case itself because it is still pending.

In an email, George wrote that she suspected Lewis felt "an incredible amount of pressure" to take a deal, given that she otherwise faced the prospect of two separate prosecutions.

"She likely faced a choice between the lesser of two evils," George wrote. "This is exactly how our system typically plays out. We put the entire weight of the government on someone's back and hope they eventually cave."

Donovan's office said the AG would not comment before Thursday's hearing. Asked about the plea arrangement during a COVID-19 press conference, Scott said he was unaware of it and could not comment.

AG Donovan Refiles Murder Charge in Burlington Meat Cleaver Case
By Sasha Goldstein
Off Message
Montague has publicly pressed for his shooter's prosecution and previously expressed optimism when Nolan brought fresh gun charges in 2019. On Tuesday, he told Seven Days he was still processing the terms of the deal but planned to issue a statement in the near future.

"One of the sorest parts of my body is my tongue," quipped Montague, who suffered lasting physical effects from the shooting, "because I've been biting it for so long."
Prev
Next

Magic Mann Serves Up CBD-Infused Takeout and Education in Essex