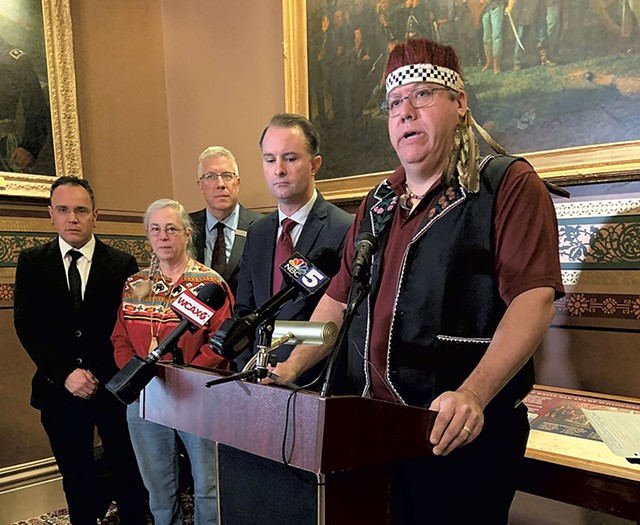 It was, in the words of Don Stevens, chief of the Nulhegan Band of the Coosuk-Abenaki Nation, “a long time in coming.”

On Monday, Gov. Phil Scott signed into law H.716, which grants free and permanent hunting and fishing licenses to the approximately 6,000 members of Vermont's four officially recognized Native American tribes. Introduced in February, the bill passed both legislative houses with broad support from across the political spectrum, and with an endorsement from Vermont Attorney General T.J. Donovan.

“This bill is very significant,” Stevens wrote in an email to Seven Days. “It finally recognizes the agreements our Abenaki ancestors retained in our 1796 land grants and other treaties to always reserve the rights to hunt and fish in our territories. This helps our people continue to have access to our natural food sources, and removes the financial barriers that may have prevented some of our citizens from that access.”

As Stevens noted during a February 5 press conference when the bill was introduced, the Abenaki weren’t seeking preferential treatment or looking to deprive others of their property rights. The Vermont Fish & Wildlife Department already issues free hunting and fishing licenses to seniors, veterans and people with disabilities. This legislation simply adds a new category of hunters and fishermen who are exempt from state fees. Abenaki sportsmen must still abide by all fish and wildlife regulations and seasons. The new law takes effect on January 1, 2021.

Passage of H.716  is just the latest victory for Stevens, 53, who represents a new generation of Abenaki leaders. He is less confrontational and more adept than many of his predecessors at working within the legal and political framework of Vermont's dominant culture.

Chief Don Stevens Represents a New Era of Abenaki Leadership in Vermont
By Ken Picard
Culture
In July 2019, Stevens convinced the University of Vermont's then-president, Thomas Sullivan, to issue a formal apology for the university's role in the eugenics survey of the early 20th century. J.R.H.7, a pending joint House resolution, would offer a similar apology on behalf of the State of Vermont and express condolences to those harmed by state-sanctioned eugenics sterilizations.

Stevens also supports the push to enact H.880, which would add Abenaki place names to all Vermont State Park signs. That bill passed the House in June.  The Vermont Commission on Native American Affairs has been the lead promoter of that bill, which was introduced by  Rep. Brian Cina (P/D-Burlington).

Correction, July 15, 2020: This story has been updated to reflect the commission's role in H.880.
Prev
Next