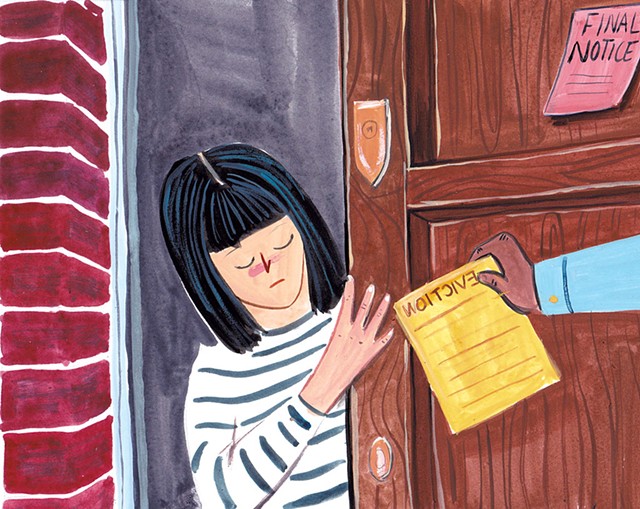 The Vermont Senate on Tuesday gave final approval to a bill that would place a moratorium on evictions and foreclosures until 30 days after Vermont's state of emergency is lifted.

Senators, who backed the bill last month in their first-ever remote vote, approved several proposed amendments from the lower chamber on Tuesday before unanimously agreeing to send the bill to Gov. Phil Scott, who has not said whether he will sign it.

"It [is] an unusual bill in the sense that both sides — landlords and tenants, [who] usually have differences when it comes to legislation — all came together, and, in the COVID-19 spirit of legislation, agreed," Sen. Michael Sirotkin (D-Chittenden) said prior to Tuesday's vote.

Vermont Senate Passes Eviction Moratorium During Historic First Video Vote
By Kevin McCallum
Off Message
The bill, S.333, seeks to prevent people from being thrown out onto the street at a time when the governor has issued a stay-at-home order to slow the spread of the coronavirus. Scott's order is set to expire May 15.

It is unlikely that the legislation would have a wide-ranging impact, given that most evictions during the pandemic have already been blocked through other means. Some courts have imposed a de facto moratorium on new evictions; several judges have blocked pending ones; and various federal laws or rules called for a halt to foreclosures on properties with federally backed loans.

The House approved the bill last week with several proposed tweaks. One permits foreclosures on unoccupied homes as long as all parties agree that the house should be repossessed or if the owner of the property cannot be located. Another bolsters protections for mobile home owners. The third clarifies that landlords who have served tenants with eviction notices prior to the state of emergency will not need to restart the process. Sirotkin said landlords and tenants agreed with the changes.

The bill now heads to Scott, who has appeared open to the concept at recent press conferences but has not indicated whether he will sign it into law. Asked last Friday whether he supports the bill, Scott said that he could have blocked evictions and foreclosures through an executive order but instead chose to collaborate with the legislature.

He said his administration has worked "side-by-side" with lawmakers on the bill and thought they were "getting to a good place."

"But we'll wait to see what the final version is," he said.
Prev
Next