For decades, Germaine and Gary Morse kept the stick in an umbrella stand by the entryway in their Vermont home.

Germaine’s brother, Anthony Bean, had found the weathered, slightly crooked piece of wood inside his grandmother’s Northfield home after buying it in 1980. Knowing his sister’s affinity for family mementos, Bean gave it to her, thinking it was an old field hockey stick or something.

“He thought it might be a conversation piece,” said Germaine, 70.

It's certainly a conversation piece now. That piece of wood is a primitive ice hockey stick that could be 170 years old. It was appraised at $3.5 million and is up for auction online through May 16, with a starting bid of $100,000.

The heirloom was little more than an afterthought, sitting in an old crock the Morses use as an umbrella stand, until about six years ago. That’s when Germaine saw something online about a circa 1850s hockey stick owned by Gordon Sharpe. Known as the “Rutherford Stick,” it looked awfully similar to Germaine’s own — and had been appraised at $4.5 million.

“It piqued my interest,” Germaine said with a laugh. “I thought, ‘Well, maybe I better look into this.’”

One of the first things they did was buy a 700-pound gun safe to store the stick in. They told only a few family members about their find and didn’t tell friends or neighbors.

“We didn’t want anybody trying to find it,” Germaine said. “We’re kind of worrywarts!”

Germaine started investigating online, “and one thing would lead to another,” she said. But they often hit dead ends.

She tracked down many of the people who helped verify and research information about the Rutherford Stick. Among those were famed hockey historian Bill Fitsell and Phil Pritchard, the curator at the Hockey Hall of Fame in Toronto and the man best known as the keeper of the Stanley Cup, the NHL’s historic championship prize.

“He liked the stick and said he’d like to have it [at the Hall of Fame] on display, but he wasn’t allowed to purchase it,” Germaine said.

Before getting an appraisal, the Morses made several trips to Canada to confer with experts, and they had wood analysis and carbon dating done on the stick, among other research. That analysis found that the stick dates to somewhere between the 1850s and 1870s, an age that makes it one of the oldest hockey sticks still in existence.

The Morses also learned that the stick was made from a single branch of a hornbeam tree; someone hand-carved the stick’s blade. Members of the Miꞌkmaq First Nation in Nova Scotia used the trees to make hockey sticks, Germaine said she learned during her research. While the first organized indoor ice hockey game was played in Montréal in 1875, the game’s roots date much further back. 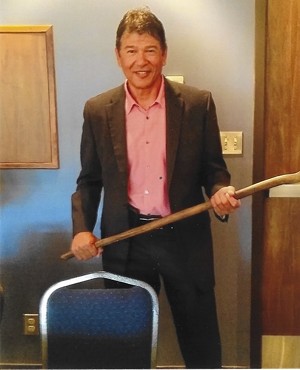 Germaine’s French Canadian grandfather was born in Nova Scotia and later moved to Vermont, so Germaine suggested it’s possible he brought the stick with him, “though we just don’t know,” she said. If he had, it would have likely first belonged to her great-grandfather, then ultimately ended up in her grandmother’s Northfield home.

“It’s been a very interesting journey,” Gary, 71, said of all the research, which included exploring Germaine’s family genealogy.

The Morses were floored when they finally got the appraisal: $3.5 million.

They eventually hooked up with Goldin Auctions, a sports collectibles auction company in New Jersey, and got the stick listed this week. The auction runs through May 16, and bidding generally intensifies toward the end.

“I’m hoping that, seeing as everybody has to stay at home, they’ll have nothing to do but bid!” Gary quipped.

The Morses now feel more free to speak publicly about their valuable antique. It's no longer in the gun safe at their Roxbury home but is in the hands of the auction house, stored in a New Jersey vault until the bidding is over and the winner claims it.

The couple doesn’t have any expectations of what the stick will fetch. They plan to split the proceeds 50-50 with Germaine’s brother, as he’s the one who found it and gifted it to them.

“I don’t get too excited over the money part until it goes down the road,” Germaine said. “I don’t let it go to my head. We’re just hoping to build up a little retirement again.”

Said Gary: “Whatever we get, we get.”
Prev
Next