Vermont to Allow Firearm Sales During Outbreak | Off Message 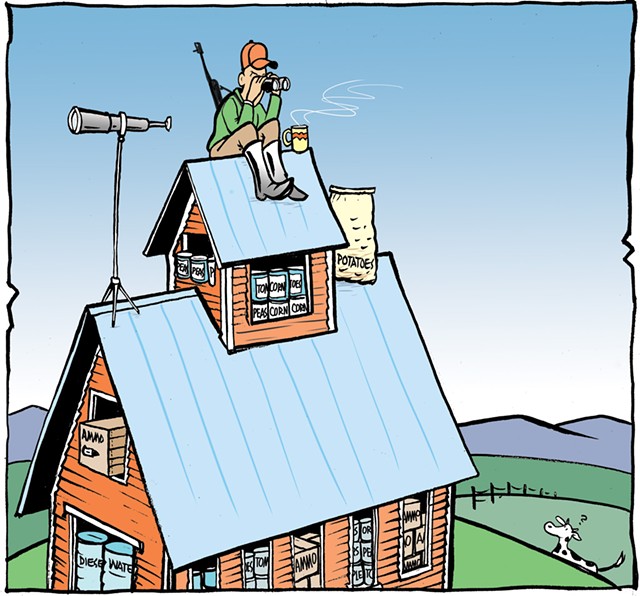 Vermont gun shops can continue selling firearms during the coronavirus outbreak, according to Secretary of Commerce Lindsay Kurrle, though they must do everything they can to limit face-to-face contact.

"They're allowed to make those sales, and wherever possible we want them to do it online and [through] curbside pickup," Kurrle told Seven Days Friday morning. "But because we recognize that you can't legally buy a firearm without an in-person connection during that process, obviously that can happen."

On Friday afternoon, the state’s Agency of Commerce and Community Development issued new guidance clarifying regulations for gun shops. The rules allow for “in-person transactions to comply with background checks” but call for dealers to limit contact with buyers.

The agency recommends that gun shops make appointments with customers, use curbside pickup, conduct financial transactions over the phone, suspend browsing, limit the handling of firearms and “suspend the sale of non-essential items,” such as clothing, shoes and outdoor supplies.

The legal status of gun shops had been unclear since Gov. Phil Scott issued a "stay home, stay safe" order on March 24. The order suspended all "in-person business operations," except those deemed essential to protecting public health, safety and national security. Certain retail businesses, such as grocery stores and pharmacies, were specifically exempted from this mandate. Others, such as hardware stores, were allowed to stay open as long as they used curbside pickup "to the extent possible."

Firearms dealers were left unmentioned in the order and in a "critical business list" subsequently issued by the Agency of Commerce, though "sporting goods" stores and "other miscellaneous store retailers" were deemed nonessential.

Kurrle said Friday that firearms dealers would be treated similarly to hardware stores.

In the absence of specific state guidance, some gun shops had closed and others remained open.

According to a post on its Facebook page, Powderhorn Sports in Williston closed on March 25 "until we figure out more about what they consider 'essential.'" In a March 30 update, the store indicated that it would reopen the next day. "We will be going back to what we were doing just before the mandated shut down, which is allowing a limited amount of customers in the store at a time so that we can provide ample amount of distance between our customers," the post read.

Complicating matters, President Donald Trump's administration issued nonbinding guidance to states and cities last week that firearms dealers should be considered essential. Parro's Gun Shop & Police Supplies in Waterbury cited that ruling in a March 30 post on its Facebook page explaining why it would remain open. "With the new President Trump ruling, it is clear," the post read. Later that day, the store posted a note saying that it had "received a pallet of ammo today."

Related Amid Coronavirus, Business Is Booming for Vermont Gun Stores

Amid Coronavirus, Business Is Booming for Vermont Gun Stores
By Colin Flanders
Off Message
Gun-rights groups have been lobbying the Scott administration to allow the state’s firearms dealers to stay in business. In a March 27 letter to the governor, Gun Owners of Vermont president Eric Davis called on him to deem them essential. “As I’m sure you are aware, many residents have chosen to purchase a firearm for protection during this time of uncertainty and Article 16 of the Vermont Constitution guarantees them that right,” Davis wrote.

Other states and cities have sought to close gun shops but have encountered resistance. On Thursday, the National Rifle Association sued New York Gov. Andrew Cuomo for declaring firearms dealers nonessential, calling his executive order a "pointless and arbitrary attack on the constitutional rights of New York citizens and residents."

As Seven Days reported last month, the pandemic has led to a boom in business for Vermont's firearms dealers. “People are fearful they could be isolated,” Henry Parro, owner of Parro's Gun Shop, said at the time. “They’re fearful that if things got really bad, they would not have a firearm to protect themselves and their family.”  New data since released by the Federal Bureau of Investigation show that use of the National Instant Criminal Background Check System in Vermont soared last month, suggesting a major uptick in gun sales. According to the FBI, 7,023 Vermonters submitted to federal background checks in March — nearly twice the 3,642 who did so in February.

The latest numbers break Vermont’s previous record of 6,177 background checks, which was set in March 2018. That peak came as the Vermont legislature debated new gun laws in the wake of a mass shooting at a high school in Parkland, Florida, and a planned shooting in Fair Haven.