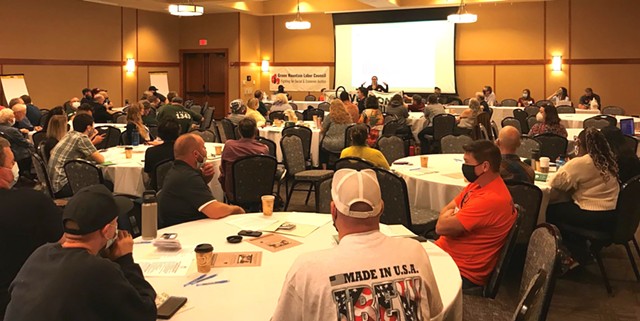 Some local unions are calling for one of Vermont’s largest labor groups to withdraw a controversial resolution in favor of gun rights.

The measure, passed by the Vermont AFL-CIO at its annual convention last Sunday, puts a modern twist on the age-old argument against gun control: It says that extremist groups such as those that participated in the January 6 storming of the U.S. Capitol already have access to firearms, so tighter restrictions would only succeed in preventing law-abiding citizens from defending themselves.

“Organized Labor must not rely on the armed wing of the Government to defend democracy, our communities, labor organizations, allies, and regular people in the event of a crisis or attack by fascists, white supremacists, or individual extremists,” the resolution reads.

Echoing the document, union president David Van Deusen said in an interview that it’s “counterintuitive” to believe that progressive groups such as the Vermont AFL-CIO should not have access to firearms when “extremists on the right” are “armed to the teeth.”

“That’s just the reality of the America we’re living in today,” he said.

But critics of the resolution point to another reality — the plague of gun violence — and say they fear that the resolution will only add fuel to a zero-sum game.

On Thursday, the Vermont chapter of the American Federation of Teachers called on the state’s AFL-CIO to withdraw its resolution over concerns that it would promote further violence. In an interview, Vermont AFT president Deb Snell said the workers she represents — nurses and teachers — know all too well the threat that gun violence poses to communities. She called the resolution only the latest in a series of reckless decisions by the larger labor group.

“They seem to have become more of a political organization than a union,” she said.

An umbrella organization, the Vermont AFL-CIO represents 11,000 workers across various sectors, including 6,000 nurses and teachers in the 10 local unions that comprise AFT Vermont.

Roughly half of AFT Vermont’s members stopped paying dues to the larger group two years ago over concerns with the direction it was headed, Snell said. She could not confirm whether additional local unions might also stop participating in light of the gun resolution, saying that it was up to their respective leaders. But she said leaders of each individual union were in favor of Thursday's press release.

Still, not everyone represented by AFT Vermont agrees with the group’s stance. David Feurzeig, a University of Vermont professor who attended last weekend’s convention, said he opposed the resolution but was ultimately happy with the way it was adopted — through a robust debate and vote.

Describing the resolution as a “red herring,” Feurzeig said the spat between the labor groups was really a debate over union democracy. Snell should have encouraged her members to show up to the convention if she wanted them to have a say on what was approved there, Feurzeig said. Sniping about it now amounts to "Monday morning quarterbacking."

“Democracy is messy,” he said. “If you want to influence an outcome then you have to participate in the process.”

Van Deusen, the AFL-CIO president, said he had no desire to withdraw the resolution. Even if he did, he wouldn’t be able to do it unilaterally, he said, since political positions adopted at the annual convention can only be altered at a subsequent convention — and only if approved by a majority of attendees.

"This isn't a dictatorship," he said.
Prev
Next