Vermont to Receive $2B From Coronavirus Bill Backed by Leahy, Sanders | Off Message

Vermont to Receive $2B From Coronavirus Bill Backed by Leahy, Sanders 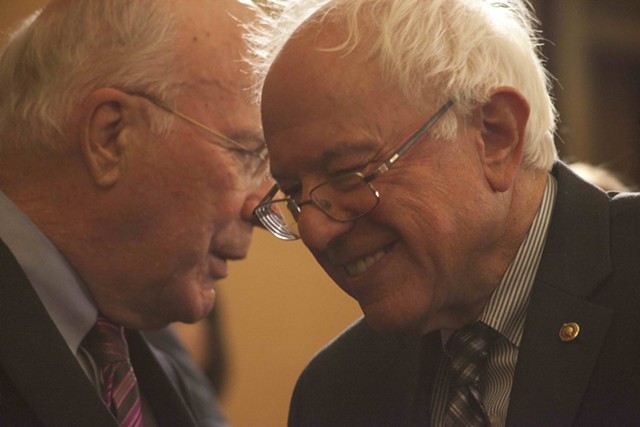 The $2 trillion bill, approved late Wednesday by the U.S. Senate, is intended to shore up the economy and provide direct relief from the coronavirus pandemic. It passed by a vote of 96 to zero, with Leahy and Sen. Bernie Sanders (I-Vt.) voting in the affirmative. The U.S. House is expected to sign off on it Friday with a voice vote.

The stimulus package — the largest of its kind in U.S. history — includes $1,200 checks for most Americans, an expansion of unemployment benefits, support for major industries and small businesses, and grants to hospitals and state governments.

As the top Democrat on the Senate Appropriations Committee, Leahy negotiated the spending provisions in the legislation, as well as those in two previous coronavirus relief packages. He worked to apply a small-state minimum funding formula to a $150 billion provision intended to support state and county governments, his office said. As a result, Vermont is slated to receive $1.25 billion through the program.

In addition to that, Leahy's office said the state would also collect, among other things:

"Vermont had a front seat in writing and negotiating this bill," Leahy said in a written statement late Wednesday. "I am pleased that Vermont will receive this critical assistance and know more will need to be done.”

In a conference call with reporters on Thursday afternoon, Leahy said he had spoken with Gov. Phil Scott nearly every day since the crisis began. "We've talked on weekends, evenings and so forth," he said. According to Leahy, the state has been especially focused on ensuring that small, rural hospitals have the resources to stay in business while their money-making services are interrupted. He said he was also particularly proud about securing money for LIHEAP and for Vermont food banks.

Sanders, meanwhile, successfully fought an attempt to reduce the amount of direct support some Americans would receive. On Wednesday, four Republican senators threatened to block the bill, arguing that its unemployment benefits were too generous and would therefore prompt companies to lay off their employees and workers to quit.

Sanders responded by threatening to block the bill if they got their way. "In my view, it would be an outrage to prevent working-class Americans to receive the emergency unemployment assistance included in this legislation," he said in a written statement Wednesday afternoon.

In the end, all five senators backed down and the unemployment benefits remained intact.

Speaking late Wednesday on the Senate floor, Sanders excoriated his four foes for opposing assistance to ordinary Americans while pushing for industry bailouts.

"And now I find that some of my Republican colleagues are very distressed. They’re very upset that somebody who’s making 10, 12 bucks an hour might end up with a paycheck for four months more than they received last week," Sanders said, waving his arms in the air. "Oh, my god! The universe is collapsing! Imagine that."
Prev
Next