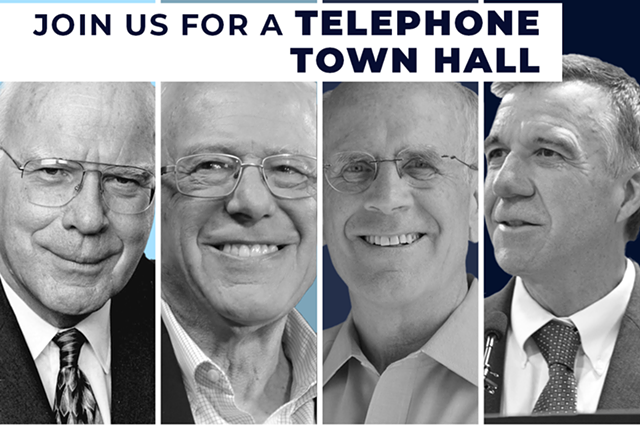 Vermont's top elected officials held a telephonic town hall on Thursday, fielding questions from across the state about the response to the coronavirus pandemic.

"I don't have to tell anybody that we are living in a moment of unprecedented difficulty for our state and for the entire country," Sanders said in his opening remarks, which came a day after he suspended his campaign for the Democratic presidential nomination.

"The function of tonight is to get information out to you," he later told the audience. "Get your pencils out, get your papers out and take some notes if you need to."

Related Vermont to Receive $2B From Coronavirus Bill Backed by Leahy, Sanders

Vermont to Receive $2B From Coronavirus Bill Backed by Leahy, Sanders
By Paul Heintz
Off Message
Some asked for specifics about unemployment benefits and small business loans, detailing how the crisis has left them without steady cash flows to pay their bills or employees. Others asked how to avoid getting sick and pressed for information on the state's testing capacity. Still more asked whether anything is being done to help farmers or to expand broadband connection for families whose children are trying to learn from home. Many thanked the elected officials for their work, even while expressing frustrations.

Perhaps the most illuminating discussion followed a question from Newfane resident Thomas Ely, a retired Episcopal bishop who asked the officials for their top "uncompromising" goals in the months ahead.

Sanders said his top priority is ensuring that medical personnel — whom he believes the government should give hazard pay — have the proper equipment needed to combat the coronavirus. "There are doctors and nurses putting their lives on [the line] who don't have the [proper] protective masks or gloves or gowns," Sanders said, calling that fact "disgraceful."

The senator also suggested that America should follow the lead of some European countries and guarantee a continued paycheck for all workers, instead of forcing them to wade through a complicated bureaucratic unemployment process. And he said he wants to see Medicare cover all out-of-pocket medical expenses during the crisis.

Self-Employed Vermonters Must Wait for Federal Unemployment Benefits
By Colin Flanders
Economy
Welch said he wants to simplify the process of getting money out to small business owners, farmers and people who are out of work and struggling to meet their basic needs.

"The only reason they're not working is because they're complying with the public health orders that's really necessary for the well-being of all of us," Welch said.

Similarly, Leahy said his focus remains on pressuring federal officials to distribute funding from the recently passed $2.2 trillion relief package, from which Vermont is poised to receive about $2 billion.

Leahy said the Trump administration has been dragging its feet on doling out the much-needed financial aid, which includes funding for small community hospitals that have taken a large hit due to the cancellation of elective procedures. The state's share will also include about $20 million for public transportation, $5 million in grants to address unemployment and economic disruption, and $4.6 million in housing assistance grants.

As Markets Dry Up, Some Vermont Dairies Are Dumping Milk
Dairy, coronavirus, milk prices
By Kevin McCallum
Off Message
"That's gonna be my biggest priority for the next week," Leahy said. "Just pounding on them to get the money out that we already have."

When one caller asked whether the federal government had sent any of that money to Vermont, Sanders said he knew the answer but deferred the question to Scott, asking in jest, "Governor, have you gotten any checks in the mail yet?"

"Um, I haven't been to the mailbox today," Scott joked. Turning serious, he said Vermont received a "little bit of money" in the beginning of the crisis but the rest has yet to arrive.

Vermont could use all the cash it can get right now. The health crisis has already cost the state $389 million in tax receipts — about 44 percent of what it was expecting to collect by June 30, according to the latest projections by the legislature's Joint Fiscal Office. And with the current fiscal year three-quarters of the way through, much of that money has already been spent.

Downgraded: Coronavirus Is Ravaging Vermont's State Budget
By Paul Heintz
Politics
Citing the budget deficit, Scott said one of his main priorities in the coming months is to "keep the money flowing" to struggling Vermont workers.

"If we don't have those [tax] dollars, we can't take care of the most vulnerable," Scott said. He also referenced record-breaking demands on the state's Unemployment Trust Fund, with the Vermont Department of Labor reporting Thursday that roughly 72,000 people had filed jobless claims since mid-March — more than 10 percent of the state's overall population.

"Going into this, we had a half a billion dollars in our trust fund," Scott said. "I would say by the end of this, that will be depleted, as well as our Education Fund."

"We want kids to get back to somewhat of a normal routine or life," the governor continued. "We don't know what that's going to look like. But we're going to need dollars ... so we can get our schools back open again."

Before concluding the call, Sanders emphasized the need for Vermonters to come together amid the crisis.

Financial Therapists Help Vermonters Cope With a Tanking Economy
By Chelsea Edgar
Economy
"We are going to have to do everything we can at the local, state and federal level to get through this in one piece," he said.

For its part, the state's Congressional delegation remains focused on ensuring that the $2.2 trillion relief package is rolled out "as well as it possibly can" be, Sanders said. He added that lawmakers in Washington will "no doubt" need to pass at least one more piece of major relief legislation before the crisis subsides.

"The points that so many of the questioners have made tonight are going to help us refine that legislation to address the needs of a rural state like Vermont," Sanders said.
Prev
Next