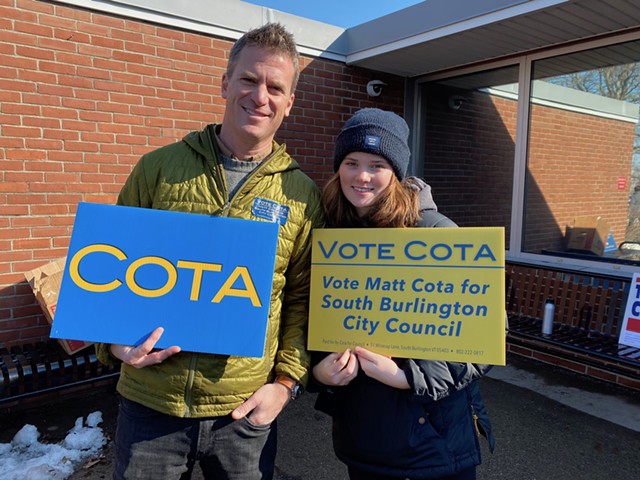 It's not over until it's over — and in South Burlington, it ain't over.

After losing by only 74 votes Tuesday, South Burlington City Council candidate Matt Cota has successfully sought a recount in his race against incumbent Meaghan Emery.

She won with 3,940 votes compared to 3,866 for Cota, which equates to 50.47 percent of the total vote to Cota's 49.52 percent. That outcome easily meets the statutory requirement that allows for a recount when the margin of victory is less than five percent.

Cota said he requested the recount Wednesday morning not only because the results were so close, but also because the city was swamped with a much higher turnout than normal on Town Meeting Day. The city ran out of ballots and had to make copies, which meant officials had to hand count a portion of them.

"Given these sort of odd circumstances where we ran out of ballots, this will ensure that we have a final tally that reflects every vote," Cota said. He added: "I would fully expect that anyone in my position, including my opponent, would do the same thing."

Emery said she expects to hold onto her victory after the recount.

"I have confidence in our city clerk's office," Emery said. City Clerk Donna Kinville "handles elections very professionally, and I would be surprised if there was a change in the results."

She acknowledged that Cota's request fell within statutory parameters.

"It's his right," she said, adding: "I know that there were a lot of vested interests in his campaign and they had a lot riding in this election."

While Tuesday's Town Meeting was also presidential primary day this year, the high turnout was most likely driven by a much more local issue — an unprecedented $209 million school bond.

Because the machines could not read the photocopied ballots, city officials hand counted about 1,800 of them. Kinville said the recount must be done within five days of Wednesday's request and that she is in the process of scheduling it.

The recount must be conducted by the city's Board of Civil Authority. Both candidates have a right to be present at the count.

Kinville said she ordered 7,000 ballots, which is about 2,000 more than normal, knowing the bond was hotly contested and that it was a presidential primary day. "We still fell short," she explained.

Each ballot costs 40 cents. Over-ordering is a waste of taxpayer funds, so she tries to avoid that, Kinville said.

She called the turnout "amazing, but very chaotic and challenging."

Poll workers helped by warning that electronic ballots were running low so there was time to photocopy additional ballots. And while the tallying wasn't done until shortly before midnight, Kinville said, "everybody voted, everybody got their vote counted."
Prev
Next