For the first time this election season, Sen. Bernie Sanders (I-Vt.) got blown out of the water.

Former vice president Joe Biden, whose campaign had largely been written off after poor performances in Iowa and New Hampshire, trounced Sanders and the rest of the field in South Carolina on Saturday. With more than 90 percent of precincts reporting, Biden had picked up 49 percent of the vote. Sanders trailed with 20 percent and former hedge fund executive Tom Steyer with 11 percent.

Steyer, who had staked his campaign on a win in South Carolina, announced Saturday night that he would leave the race.

Speaking earlier that evening at a campaign rally in Norfolk, Va., Sanders highlighted his past successes in Iowa, New Hampshire and Nevada. "But you cannot win 'em all," he said. "A lot of states out there, and we did not win in South Carolina."

As the crowd booed, Sanders continued. "And that will not be the only defeat. There are a lot of states in this country. Nobody wins them all," he said. "I want to congratulate Joe Biden on his victory tonight. And now we enter Super Tuesday."

Sanders had, in fact, already been focused on the 14 states that vote next Tuesday and account for a third of the delegates to the Democratic National Convention. Since winning the Nevada caucuses last Saturday, he had touched down in Texas, North Carolina, Virginia and Massachusetts. In the coming days, he is scheduled to campaign in California, Utah and Minnesota — before coming home to Vermont for a Super Tuesday rally at the Champlain Valley Exposition in Essex.

Earlier Saturday, Sanders drew some 13,000 people to Boston Common for a massive rally in Sen. Elizabeth Warren's (D-Mass.) backyard. Recent polls suggest that Sanders has a shot at winning Massachusetts, where 91 delegates are on the line.

Referring to himself as "your neighbor [from] up north," Sanders pledged to the assembled Bostonians that he would defeat President Donald Trump in the general election. "Today we say in the cradle — right here in Boston — of American democracy that we will not allow this country to move toward an autocracy," he said. "Nobody, nobody, not even the president of the United States, is above the law."


Though he did not mention her by name, Sanders appeared to take a swipe at Warren by criticizing the presence of super PACs in the race. Warren, previously an outspoken opponent of big money in politics, recently reversed course and signaled that she was comfortable with outside spending on her behalf. Shortly thereafter, the pro-Warren Persist PAC increased its ad buys to $14 million. 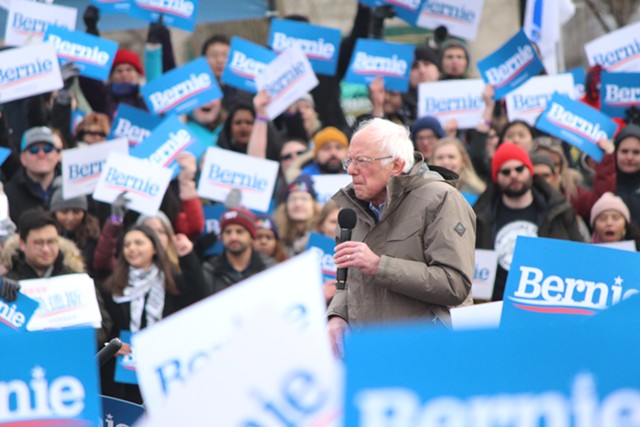 Sanders argued that special interest groups were lining up to defeat him, including Wall Street, the pharmaceutical and insurance industries, and the military-industrial complex.

Sanders also took on the argument that he would be a risky bet for Democrats in the general election. In fact, he said, he led the president in most head-to-head polling, particularly in the battleground states of the industrial midwest.

"We're gonna win this election despite a lot of the pundits and establishment saying, 'Bernie can't beat Trump,'" he said. "There's gonna be a lot of hurdles thrown in our way and that's the new one."
Prev
Next