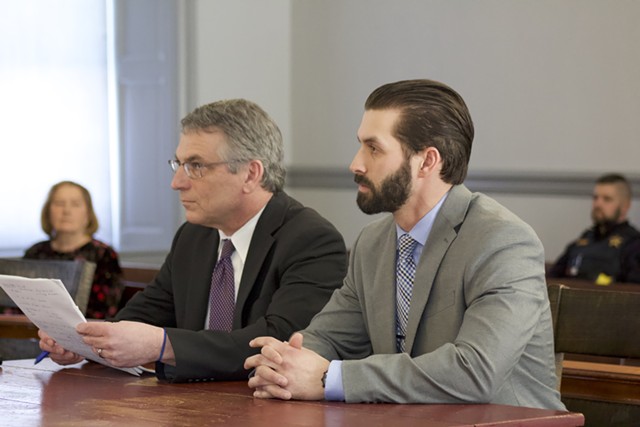 A Winooski police officer pleaded not guilty Thursday to charges that he strangled, assaulted and repeatedly threatened his girlfriend.

Matott did not speak during his brief arraignment in Vermont Superior Court in North Hero. Attorney Robert Katims entered pleas on his behalf and told Judge Samuel Hoar that his client had entered counseling.

Two weeks ago, sheriff's deputies in Grand Isle County served Matott with a temporary relief from abuse order sought by his girlfriend, as well as a temporary extreme risk protection order. The court orders required that Matott relinquish his weapons. At that time, Winooski police placed Matott, a detective assigned to a federal Drug Enforcement Administration task force, on paid administrative leave.

Matott worked as an officer in South Burlington from March 2014 to July 2017, according to Chief Shawn Burke. He joined Winooski PD on July 12, 2017, Chief Rick Hebert said.

Vermont State Police began a criminal investigation against the officer on February 7, according to an affidavit made public following Thursday's hearing.

The eight-page document details numerous instances of verbal and physical abuse based on an interview with the alleged victim. One of those occasions took place in November 2018 at a hotel in South Burlington following a surprise birthday party the woman said she'd thrown for Matott.

An enraged Matott allegedly confronted the woman in their hotel room because he believed she was romantically interested in another man at the party. He called her derogatory names, then strangled her with both hands until she "blacked out," the woman recalled.

About a week after that incident, the woman said she approached two female South Burlington police officers for advice.* The pair urged her to leave Matott and said they would confront him about his behavior, according to the affidavit.

Months later, in July 2019, Matott suggested the woman should have her "throat slit" for speaking to the SoBu officers, according to an audio recording she provided to investigators.

"You deserve nothing in life," he can be heard saying, according to the affidavit. "I will kill every single person important to you."

The woman told investigators she started recording their arguments within the last year and a half, as Matott's abusive behavior escalated. She said he was a former Army medic who spoke about the number of people he killed overseas. At other times, he discussed burning down the couple's Alburgh house and using a shock collar to inflict pain on their pet dogs.

"The Victim said there have been times that he'd come home and randomly point his loaded firearm at the dogs and say, 'I could shoot you right now,'" the affidavit states.

On other recordings reviewed by investigators, Matott can be heard directing racist, sexist and ableist slurs at the woman or those with whom she is associated.

Much of the behavior described in the affidavit was said to have taken place while the woman was pregnant. He once used a broom to pin the woman to the couch as she cried; she was eight months pregnant at the time. The abuse continued once the couple's newborn child was born late last year. A January recording captured Matott yelling that she is a "pussy little bitch" and a "fucking retard" as he can be heard punching nearby objects. Their newborn can be heard crying, the affidavit states.

Two instances were said to have involved firearms: once when he pointed a gun at her head as she lay in bed, and another time when he paced with a pistol and discussed killing himself in front of her.

Matott was released Thursday on the condition that he not contact the alleged victim or possess any deadly weapons.

With the filing of criminal charges, Matott was moved to unpaid administrative leave, Winooski Chief Hebert said in a Wednesday press release. The department said it will conduct its own investigation following the resolution of the criminal case.

"Members of the Winooski Police Department hold our role as guardians within our community in the highest regard, and it’s disheartening to be informed that an employee is accused of domestic violence," Hebert wrote.

Grand Isle County State's Attorney Doug DiSabito said in court that he planned to drop the extreme risk protection order in light of the criminal case. A hearing on the separate relief from abuse order is scheduled for next week.

On Friday, South Burlington Chief Burke said he opened an internal investigation to determine whether the two female officers named in the criminal affidavit failed to report information about alleged abuse. Department policy requires that officers tell their supervisor of any allegations of domestic violence made against another law enforcement officer.

The officers remain on duty, Burke said, but could face retraining if the review finds evidence of a policy violation. Burke noted that the affidavit doesn't specify what information was shared with his officers.

"'We're fighting all the time' is much different than 'my partner hit me last night,'" he said.

Hebert said Friday the detective had "absolutely" no record of discipline within the department.

*Clarification, February 21, 2020: A previous version of this story, based on the criminal affidavit, reported that Matott worked at the South Burlington Police Department at the time of the November 2018 birthday party incident. Employment dates provided to Seven Days on Friday contradict that information. The story has been adjusted accordingly.
Prev
Next