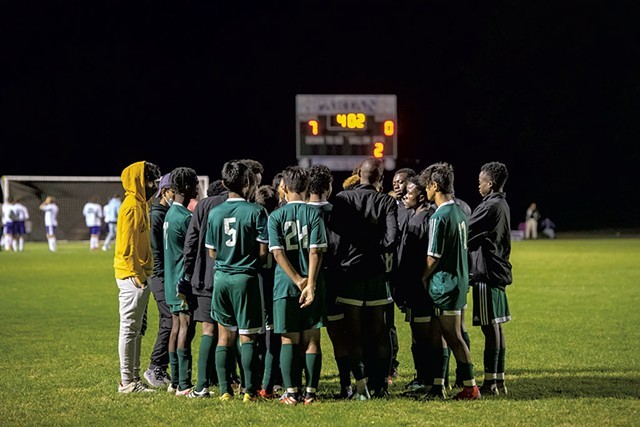 Authorities are weighing whether to charge a Winooski High School soccer player with assault for allegedly head-butting an Enosburg Falls High School player during a game last month — a legal step that would be extremely rare in Vermont school sports.

The Chittenden County State's Attorney's Office is deciding whether to charge the student. The Winooski Police Department sent the prosecutors' office a report on October 11 that found probable cause that the 19-year-old player committed what would be a misdemeanor offense.

The Franklin Northeast Supervisory Union, which includes Enosburg Falls High School, said on Monday that its two-and-half-week investigation into the matter found no evidence to substantiate the allegations of racial abuse. But superintendent Lynn Cota said she considers the investigation incomplete because Winooski student athletes declined to answer questions, and the Winooski School District did not share its investigatory notes.


A Winooski district spokesperson said officials provided Enosburg investigators with “specific information” about the racial abuse, but administrators did not allow students to be interviewed, based on legal advice.

Meanwhile, the parent of a student who was allegedly head-butted called police in Winooski after the game to report what had happened — prompting a criminal investigation.

Bob Johnson, who has spent 19 years at the VPA and now serves as its associate executive director, said he had never heard of a Vermont student athlete facing criminal charges for violent behavior against another player during a game.


The Winooski player was suspended for two games by the Vermont Principals’ Association following the game. The VPA, the governing body for school sports in the state, held a disciplinary hearing for the student on September 28. The organization wouldn't release the results of that hearing, but the student played in a game that night.


The Winooski School District declined to comment on the criminal investigation.

It is not unheard of for student athletes to be charged with a crime. But in two recent cases  — one in Texas and one in Pennsylvania — high school football players were accused of assaulting referees, not other students.

In the Winooski criminal affidavit, Officer Owen Dugan wrote that an Enosburg parent contacted the police department to report that her son had been charged and hit on the field. The following day, she and her son traveled to Winooski to give sworn statements about the incident. The Enosburg athlete said his jaw was in pain, and he planned to see a doctor.

The officer reported seeing a "slight reddish area" on the student's cheek. When hit during the game, the player said, his pain level was an eight out of 10, with 10 being the most extreme.

The report also details another incident in which a different Winooski player hit a Enosburg player hard enough that his head snapped back. The two game refs provided sworn statements and identified the Winooski players as "the primary aggressors throughout the game."

The refs said they didn't observe either alleged assault.

Upon reviewing video of the game taken by Enosburg Falls newspaper the County Courier, Officer Dugan determined that the Winooski player head-butted the Enosburg player “with force great enough to cause him to immediately drop to the ground."

It will be up to State’s Attorney Sarah George to decide whether to charge the Winooski student with a crime punishable by up to one year in jail and a fine of $1,000. George confirmed that her office is reviewing the case.

Outside of the criminal justice system, Cota has called on the VPA to assign a “neutral third party expert” to investigate the racial abuse allegations.

But VPA president Jay Nichols said in an email on Tuesday that his association can only conduct an investigation “if both schools agree to it and are willing to share the cost.” The Winooski School District said it is considering the VPA's offer, but needs more details about how an investigation would be conducted.

“We are concerned about further harm to our student athletes caused by an additional process that is currently undefined,” the statement reads.

In the interviews, Enosburg students described the game as “aggressive” and filled with shoving, swearing and trash-talking. None reported hearing racial slurs.

The summary has a caveat: "Any thorough and comprehensive investigation into student misconduct must include information from the victims of the misconduct," it says. "We freely admit that the investigation is substantially compromised by our inability to speak with the student athletes in Winooski.”

Later in the summary, Donarum characterized the investigation as "procedurally flawed."

Franklin Northeast superintendent Cota said in her press release that the district would “welcome the opportunity to come together with Winooski and repair harms that exist between the two school communities.”

While appreciative of the offer, the Winooski School District said it would decline for now.

Said the district, “Because there has not been any acceptance of responsibility for the racial abuse reported by our student athletes, this may be a difficult path to navigate and could create more harm to [Winooski] student-athletes."