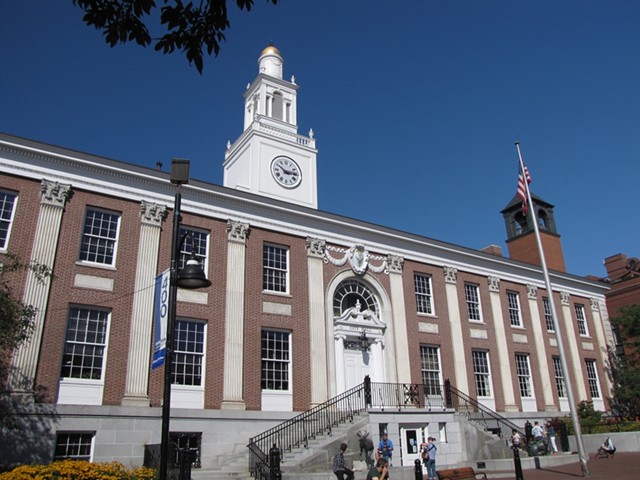 Almost everyone in a Chittenden County courtroom on Thursday agreed that Dennis Phillips belonged in a psychiatric hospital.

On Monday, after twice going to the University of Vermont Medical Center for treatment and being discharged, the 62-year-old homeless man headed to Burlington City Hall. Inside, he lit newspapers on fire and broke historic windows with a hammer. He asked police who arrested him to take him to a hospital.

Homeless Man Lights Fire in Burlington City Hall, Demands Hospital Treatment
By Derek Brouwer
Off Message
He wound up jailed on arson and felony criminal mischief charges. There, his behavior seemed to worsen, Chittenden County Sheriff's Department employees would later report. He smeared feces around his cell and, when sheriff's deputies attempted to take him to court, made animal-like sounds.

Those details were enough to convince prosecutors and his public defender, Sara Puls, that Phillips needed inpatient psychiatric care.

There was only one dissenting voice in the courtroom: the Vermont Department of Mental Health.

"You sit there, shaking your head, like, 'Is this really happening?'" said Chittenden County State's Attorney Sarah George, who attended the hearing.

The department said its stance was simply a matter of process.

In an interview, Mental Health Commissioner Sarah Squirrell told Seven Days that the department was raising questions of due diligence. It has a duty to care for patients in the least-restrictive setting, and doing otherwise could run the Vermont Psychiatric Care Hospital afoul of its federal certification, she said.

"We simply wanted to ensure there was current clinical testimony or evidence that indicated hospitalization" was necessary, Squirrell said.

The judge ultimately ordered Phillips to receive inpatient care, despite the department's objection.

To George, the hearing was another example of how the state stands in the way of efforts to keep the mentally ill out of jail. She expressed frustration in a series of tweets.

"I’m tired of the criminal justice system being a replacement for mental health services. We have allowed it for far too long, and guess what, we aren’t any good at it!" she wrote.

Puls wrote in an email that Phillips' deterioration in jail was an "exceedingly sad and frustrating, although predictable" result of his incarceration — which itself, she believed, was preventable.

"Despite DMH’s objections, the Court made the right decision based on the law and evidence to issue the hospitalization order, and I am hopeful that Mr. Phillips can get the treatment that he truly needs, and tried to get all along," she wrote.

Judges order inpatient commitments only when they determine that the individual in question is mentally ill and dangerous and that less-restrictive settings are not viable. The order places Phillips in the custody of the department.

"This is a pretty regular occurrence for us, and it's frustrating for all parties involved," George said.

Mentally Ill or Criminal? Dismissals of Murder Cases Spark Firestorm
By Kevin McCallum
Crime
The state's attorney has faced criticism for how her office has sought to direct other cases to the Department of Mental Health, including a trio of murder and attempted murder cases that she dismissed last year. The move sparked intervention by Gov. Phil Scott, and federal prosecutors and the state Attorney General's Office refiled charges against two of the accused.