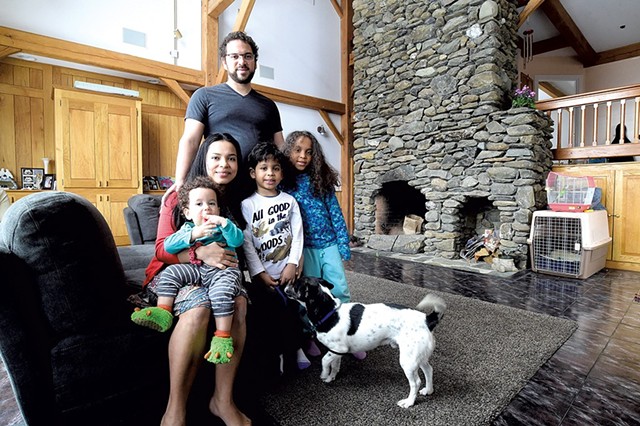 The program reimbursing workers up to $10,000 to move to Vermont is catching flak from the state auditor, who questions whether taxpayer dollars are being well spent.

He argues in a 17-page report that there is no way to prove whether the program is an effective incentive that lures new people to the state or a handout to those who were planning to relocate to the Green Mountains anyway.

Remote workers can only qualify for certain relocation and business expenses, such as high-speed internet access, once they have already moved to Vermont, he noted.

“That means they had the means and the will to relocate without the program,” Hoffer wrote.

In March, Seven Days spoke with families that had benefited from the program. Miguel and Milagro Turner had already decided to move to Vermont from Florida when friends told them about it. "The grant maybe helped us decide that now is the time," Miguel said. "I saw it as a little bit of providence."

Immigration attorney Amelia Potasznik-Kriv told the newspaper that after she and her wife decided to leave Dallas and were looking for a more progressive environment, learning about the program was "like a sign from the universe that this was the right place for us."

Hoffer’s critiques are not new. He and some lawmakers have argued that the money would be better spent on Vermont workers through job training or other education programs.

If the program were to continue, he said, people receiving the funds should have to declare that “but for” the grant, they would not have moved to the state.

Joan Goldstein, commissioner of the Department of Economic Development, said the program has been successful in attracting more of the young families the state needs.

To date, the state has reimbursed 110 people more than $400,000 for their moving and other expenses. The average age of those workers is 38, versus 55 for others moving to the state, Goldstein said.

“I think this shows that if you make that proactive effort, you might just get those young families that we so desperately need,” Goldstein said.

Lawmakers considered adding hoops to make it harder for new workers to qualify for the grants, such as by delaying the funds until after the worker had been paying taxes for a year. But those ideas were rejected in favor of a simpler, more streamlined program that accomplished the goal of motivating people to move to the state, she said.

The program was meant to be “a catalyst” to encourage people to move here, not the sole reason for their move.

“I think in all incentive programs, it’s difficult to prove a ‘but for,’” Goldstein said. “But it’s hypothetical to say they would have come here anyway. You don’t know that either.”

Hoffer cites the department’s own survey of workers’ motivations for moving to the state as evidence against the efficacy of the program.

The responses show that just 54 percent of grantees said the program attracted them to Vermont. Access to outdoor activities was the No. 1 reason cited, by 74 percent, while 66 percent said it was because Vermont was a safe place to raise a family.

“These findings indicate that the prospect of reimbursement was, at best, a minor incentive for grantees to move to Vermont,” Hoffer wrote. “At worst the grants were gifts to those who would have moved here regardless of financial incentives.”

When Hoffer's office reviewed the program over the summer, the state had approved grants averaging $3,823 to 68 workers. Those workers came from 26 states, a testament to the broad appeal of the state — and the program.

New York sent the most, 10, following closely by the Washington, D.C., area with nine. Seven workers each came from California and Massachusetts, while Colorado sent six. They were followed by Florida (4), Maine (3), Maryland (2), North Carolina (2) and Texas. Sixteen other states sent just one worker.

While they came from far and wide, however, they didn’t settle evenly across the state.

Chittenden County attracted 47 percent of the workers, with Burlington alone receiving 11. Only one person chose to live in the Northeast Kingdom, where broadband internet access is limited, while three counties — Essex, Grand Isle and Orleans — didn’t attract any remote workers.

Hoffer noted that the state reimbursed workers $18,120 for security deposits without a mechanism to get that money back if workers move. In effect, if the deposits, which represented 7 percent of the total payments, are returned by landlords, the workers can pocket that money.

Hoffer also took issue with the fact that the program had no caps on certain types of expenses. In one case, he noted the state reimbursed a worker $5,000 for 100 yards of underground conduit for high-speed internet access.

The program also doesn't distinguish between work-only expenses and those that benefit an entire household, such as an internet connection. This means that in some cases the money effectively “subsidized a higher quality of life outside of work for grantees and their households.”

The legislature has already taken some of the critique to heart. It allocated $1.2 million toward a new program designed to reimburse workers who move to the state to take jobs with Vermont-based companies, Goldstein said.
Prev
Next