One Night Only: Controversial Anti-Vax Film Screens at the Roxy | Off Message

One Night Only: Controversial Anti-Vax Film Screens at the Roxy 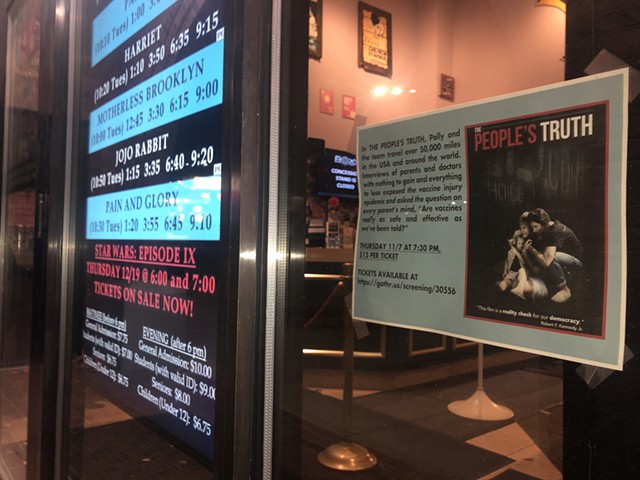 The sequel to a documentary known for spreading discredited claims about vaccinations found a receptive crowd in Burlington Thursday night during an under-the-radar screening at the Merrill’s Roxy Cinema.

About 30 people gathered for a 7:30 p.m. showing of Vaxxed II: The People’s Truth, a sequel to the controversial 2016 film that purported vaccines pose unknown dangers to children. The sequel debuted Wednesday at 50 theaters around the country — including Montpelier’s Savoy Theater.

Producers of the film sold tickets quietly in advance of the debut to avoid calls to block the movie from playing, according to the Guardian.

Health Choice Vermont, which advocates for parents to choose whether their children are vaccinated, brought the movie to Vermont through Gathr, a film distribution company that allows people to request single screenings at select theaters.

“It takes some guts to be able to show a film like this,” said Heather Rice, a chiropractor who serves on the Health Choice board, of the Roxy. “They're really defending the right to freedom from censorship.”

Like its predecessor, Vaxxed II prominently features former British doctor Andrew Wakefield, one of the researchers behind a 1998 paper published in the Lancet medical journal that sought to establish a link between autism and the vaccine for mumps and measles. Most researchers named on the paper withdrew their support of its conclusions six years later, when the UK newspaper the Times reported that Wakefield had been paid by attorneys seeking evidence to use in lawsuits against vaccine manufacturers. The Lancet retracted the paper.

Wakefield was later struck from the British medical registry, but he has discovered an audience among some parent groups in the U.S. who believe that the government and medical community are waging a campaign to force dangerous vaccines on children.

A Q&A session after the film put those beliefs on display.

“I really challenge people to walk boldly and confidently in what we believe in,” said one attendee. “Our beliefs and the message that we're sending here — people need to hear this.”

Christine Finley, the immunization program manager with the Vermont Department of Health, told Seven Days Friday that films like Vaxxed “exploit people’s fears and desires to protect their children.”

“The myths and the misinformation about vaccine safety is really difficult, because it confuses parents who are just trying to make the best decision to protect their child,” Finley said.

When vaccines work well, they prevent diseases, Finley said. That leaves parents balancing the alleged risks of a vaccine against the risk of a disease they’ve never encountered.

“Basically, [vaccines] are a victim of their own success,” Finley said.

Still, Finley said “overwhelming scientific evidence” shows there are no links between child vaccinations and autism. “Sometimes, the truth is inconvenient to some people,” Finley said.

The majority of the 90-minute doc features interviews with the parents of so-called “injured children,” or those who suffer from various mental or physical issues the filmmakers blame on vaccines.

Several states have passed laws in recent years to limit vaccination exemptions. New York, for example, recently ended religious exemptions for public school students, forcing more than 25,000 parents to decide whether to vaccinate their children, homeschool them or move, according to the New York Times.

Vermont has strengthened vaccine regulations twice over the last decade but still allows a religious exemption.

Finley said as far as she knows, the health department isn’t promoting any further changes. But some parents at the Burlington screening believe legislators aren’t finished.

Rice, the chiropractor, encouraged attendees to reach out to their state legislators and share their opinions. She said Health Choice Vermont is hosting three upcoming work sessions at which people can “groom” their skills in talking to lawmakers. She shared a few impromptu tips, suggesting that people first strike up a conversation about an issue the legislator cares about.

If that doesn’t work, she said, then just show up at the Statehouse and find them in the cafeteria.

“You can go right up to them,” she said. “Where are they gonna go?”

For the Roxy’s owner, Merrill Jarvis III, the showing was “just [another] theater rental.” He said it’s not his role to judge right from wrong.

Would any movie be too controversial for the Roxy? “I haven’t come across one yet,” Jarvis replied.

“There’s always somebody that has something against something,” Jarvis said. “That’s the way the world is. There's always two sides to every coin. I don’t make the movies. I just play them.”

Jarvis' indifference extends to vaccinations. "I don't know anything about it, really," he said. “I know when I was a kid, my mom got me vaccinated.” Moments later, he added: “I’m going to get a flu shot, if that means anything.”

Correction, November 8, 2019: Andrew Wakefield is prominently featured in the film Vaxxed II. His involvement was mischaracterized in an earlier version of this story.
Prev
Next