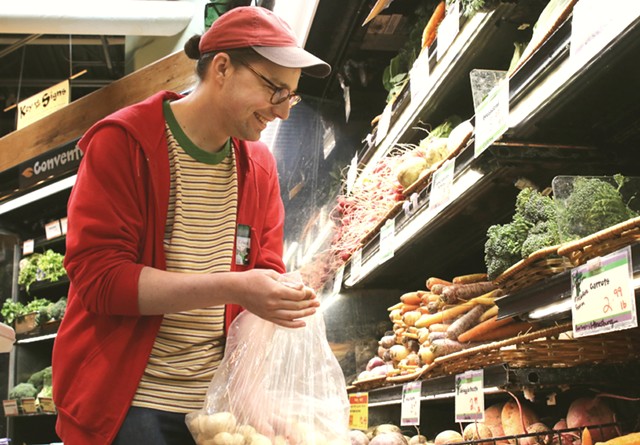 After more than 100 hours at the negotiating table, City Market, Onion River Co-op and its 270 unionized employees arrived at a new contract this month.

Negotiating teams approved a tentative agreement on October 1, and union members "overwhelmingly approved" it during a vote last weekend, according to union treasurer and negotiator Shannon Williamson. The City Market board is scheduled to ratify the contract at its next meeting.

The three-year agreement gets about halfway to the union's goal to land a $15-an-hour wage for its lowest-paid employees. Instead of starting at $11 an hour — just 22 cents above Vermont's minimum wage — the workers will start at $13. By the end of the three-year contract, that same person will make $14.07 hourly, according to the approved wage schedule.

Union Pushes for $15-an-Hour Wages at City Market
By Courtney Lamdin
Business
"I am certainly pleased that the people who really needed the help the most are going to get the biggest bump," said Williamson, a third-shift lead who has worked at City Market for almost two years. "I can't imagine how people lived on $11 an hour."

Union members had argued in prolonged negotiations that Vermont earners have to make twice that wage to afford a modest two-bedroom apartment. In August, City Market employees told Seven Days that for all of the co-op's progressive ideals, it doesn't prioritize employee welfare.

City Market general manager John Tashiro said this summer that a $15 wage is unsustainable, especially as the co-op pays down a $10 million loan for its two-year-old South End store. He said the market's benefits are generous and make up for perceived lower wages.

But to counterbalance the new contract's higher starting wage, employees' benefits took a hit. Under the previous agreement, workers earning $12 an hour or less paid no health care premiums; now, if they make $15 or less, they pay 10 percent of the cost, Tashiro said this week. Workers making $15.01 an hour or more will pay 15 percent, where they previously paid 10 percent. Employee contributions in both groups increase by 2.5 percent each subsequent year of the contract.

Williamson said the union successfully pushed back on management's efforts to cut benefits "in a drastic, quite draconian fashion." She thinks the agreement is a good compromise and said employees' raises won't entirely be cannibalized by the extra they'll pay for health care.

"Both sides felt really good about where we landed. I really commend both sides," said Tashiro, who sat in on negotiations. "I think it's a tremendous step forward," he added.

Williamson said the union will continue fighting for fair pay but noted the target wage will likely be higher than $15 by the time the contract expires in 2022.

"Fight for 15 has a great, alliterative ring to it, but it’s not going to be long before we're looking for the Fight for 18," she said, adding, "People are going to need to make a living in a way that allows them to pay their bills."
Prev
Next