Biden to Campaign in Bernie Country | Off Message

Biden to Campaign in Bernie Country 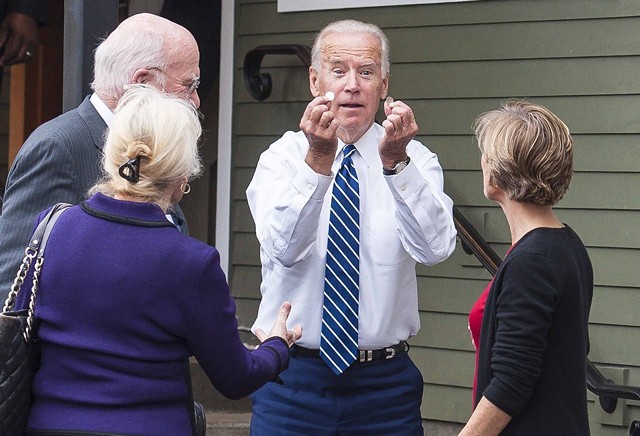 Former vice president Joe Biden plans to travel to Vermont next month, his campaign said Friday. The brief announcement included no details, other than the date of his visit: November 9.

R. Christopher Di Mezzo, a spokesperson for the Vermont Democratic Party, said the organization had not been contacted by the Biden campaign and had no additional information.

The trip will bring the former vice president to the home state of a top rival, Sen. Bernie Sanders (I-Vt.), who picked up 86 percent of the vote in Vermont's 2016 presidential primary.

Biden has visited the Green Mountain State a few times in recent years. Last December, before he joined the presidential race, he discussed his 2017 book, Promise Me, Dad: A Year of Hope, Hardship and Purpose, during an event at Burlington’s Flynn Center for the Performing Arts.

In October 2016, the sitting VP promoted his “Cancer Moonshot” initiative at the University of Vermont. During that trip, he appeared at a fundraiser for Democratic presidential nominee Hillary Clinton in Cornwall and dined with Sen. Patrick Leahy (D-Vt.) and Democratic gubernatorial nominee Sue Minter at Burlington’s Penny Cluse Café. Biden also campaigned for future governor Peter Shumlin and other Democrats at UVM in 2010.

The 76-year-old candidate infamously expressed his appreciation for Vermont in August. The problem was that he was in Keene, N.H., at the time — and appeared to be confused as to his whereabouts.

“I love this place,” he said. “Look, what’s not to like about Vermont in terms of the beauty of it? And what a neat town. This is like a scenic, beautiful town … I like Keene a lot.”
Prev
Next