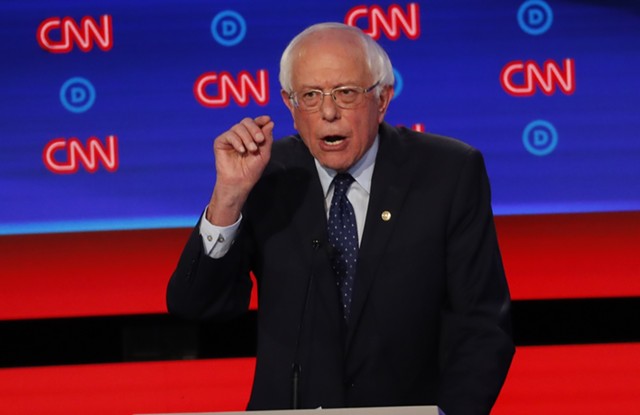 From the opening moments of Tuesday’s Democratic presidential debate in Detroit, Sen. Bernie Sanders (I-Vt.) dished out the kind of zingers that cable television craves.

Asked to respond to former representative John Delaney’s assertion that his Medicare-for-all plan was “political suicide,” Sanders said simply, “You’re wrong.” With laughter and cheers, the audience at the Fox Theatre voiced its approval.

Later, when Rep. Tim Ryan (D-Ohio) argued that Sanders’ plan would strip union members of health insurance policies they’d fought for, the senator suggested they’d be better off under Medicare. “It covers all health care needs,” he said. “For senior citizens, it will finally include dental care, hearing aids and eyeglasses.”

The moment was reminiscent of Sanders’ breakout line in the first debate of the 2016 primary, when he said that the American people were “sick and tired about hearing about [Hillary Clinton’s] damn emails.” (Later Tuesday night, Sanders trotted out the epithet again: "If anybody here thinks that corporate America gives one damn about the average American worker, you're mistaken.")

Sanders’ staffers knew they had a hit on their hands. Before the debate had ended, the campaign emailed its list of supporters, hawking stickers with an image of the candidate and the words, “I wrote the damn bill.”

Though some pundits had anticipated Tuesday’s debate as a potential showdown between Sanders and his rival for the progressive mantle, Sen. Elizabeth Warren (D-Mass.), the two wouldn’t be baited into confrontation. Rather, they spent their time beating back attacks from their moderate opponents, such as former Colorado governor John Hickenlooper, Montana Gov. Steve Bullock and Delaney.

They had plenty of time to do it: Warren and Sanders spoke considerably more than any other candidate, for more than 17 minutes apiece.

Though former vice president Joe Biden remains the frontrunner for the Democratic nomination, it was Sanders’ agenda that dominated the night. The debate was a reminder that, win or lose, the senator from Vermont has influenced the policy fights of the 2020 primary more than any other candidate.

He and his rivals spent the first 20 minutes arguing about his health care plan — and whether or not it would raise taxes on the middle class, as moderator Jake Tapper put it. “Jake, your question is a Republican talking point,” Sanders responded. “And, by the way … the health care industry will be advertising tonight on this program.”

Tapper and his fellow moderators proceeded to ask Sanders and his opponents about a variety of the Vermonter’s policy proposals and public statements. Wouldn’t providing free health care and free college to undocumented workers encourage illegal immigration? Was Sanders’ democratic socialism “too extreme to beat President Trump?” Was Sanders right to say that the U.S. cannot continue to be the “policeman of the world?”

After Ryan dodged a question about a Sanders proposal to stop manufacturing gas-powered cars by 2040, the senator said, “I get a little bit tired of Democrats afraid of big ideas. Republicans are not afraid of big ideas … Please don’t tell me that we cannot take on the fossil fuel industry.”

“I didn’t say we couldn’t get there until 2040, Bernie,” Ryan responded, sounding a bit snide. “You don’t have to yell.”

He was right. Sanders didn’t have to yell. For better or worse, his ideas were coming across loud and clear.