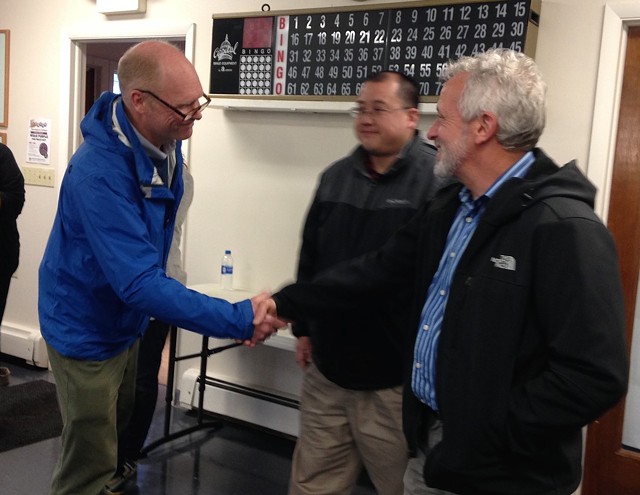 Winooski voters approved a $57.8 million school renovation bond Tuesday by a vote of 368-346.

School board members hugged and shook hands when the narrow margin of victory — 52 to 48 percent — was announced about 40 minutes after the polls closed at the Winooski Senior Center.

He then thanked residents for making the effort to cast ballots that had just the bond on them, saying that a turnout of 714 people was "a real bonus."

"It shows that we got the word out," Decarreau said.

The bond passage is a major win for Superintendent of Schools Sean McMannon, who lobbied fiercely for the renovation funding.

Superintendent Sean McMannon Is Teaching Winooski About School Spirit
By Molly Walsh
Education
The money will fund a substantial makeover of the city's school complex on Normand Street. It houses the district's 884 students from preschool to high school in one building with interconnected wings. Parts of the facility date to the 1950s.

The funding will pay for improvements to heating, ventilation and roofing, as well as a redesign of many classrooms to allow for small and large group learning. A new cafeteria and performing arts center are also part of the plan.

Leading up to the vote, some parents held house parties to drum up support. School board members helped lead tours of the school building to spotlight its aging heating system, leaky roof and, in some cases, cramped classrooms.

But some taxpayers weren't sold on such a big project. A smattering of "Vote No" signs popped up around the Onion City in the days before the referendum.

Jay Felix arrived shortly before the polls closed to vote no. He said he's already paying $10,000 annually in property taxes. While he supports the schools, "there's a limit," Felix said.

The school board should develop a capital plan and gradually pay for improvements, he added. The current school board has gotten carried away and produced a renovation plan that "is over the top," Felix said.

But other voters, including Matt Hayes, happily voted yes. "I'm voting in favor," he said Tuesday. "I want improvements for the kids and for the school."

The work will likely start in 2020 and could be completed 18 months later.