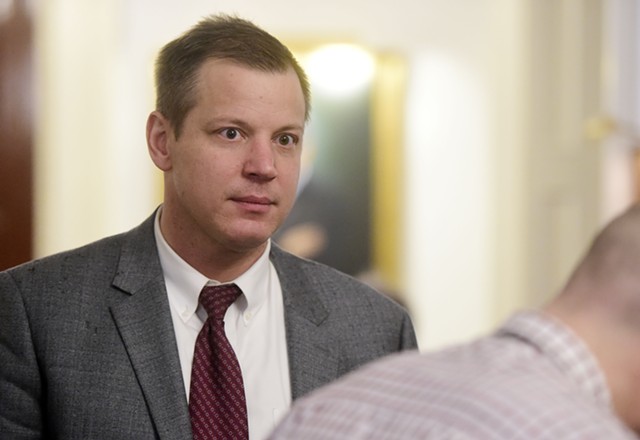 "I'll definitely miss it," he said. "But it was kind of an opportunity. Being someone who wants to live and work in Vermont — and Montpelier in particular — opportunities at National Life don't come up all that often."

Samsom, who has led the Department of Taxes since January 2017, knows a thing or two about his future employer. He spent a decade at the state Department of Financial Regulation, serving for two years as deputy commissioner of its insurance division.

"We were their primary regulator," he said of National Life. "So there was a lot of contact."

Samsom sent a formal resignation letter to Gov. Phil Scott on May 3 and announced his departure to staff on Monday, as VTDigger.org first reported. But Samsom told Seven Days he accepted the job months earlier — on February 28 — and began serious conversations with National Life a month before that.

"I have a lot of friends there — just Montpelier acquaintances and relationships from my 10 years at DFR," he said. "It was around January that it became clear that we were doing more than just talking about opportunities."

Samsom informed Secretary of Administration Susanne Young in January that he was "being recruited by a private employer," according to Scott spokesperson Rebecca Kelley, and disclosed his hiring to Young shortly after taking the job. In March, Kelley said, Samsom met with administration legal counsel Jaye Pershing Johnson "to ensure he was in compliance with applicable ethics and legal requirements."

The state's Executive Code of Ethics bars gubernatorial appointees from advocating for a private entity before a public body on matters over which the appointee "exercised any official responsibility" for a year after leaving office. Such a prohibition would not apply to Samsom's insurance regulatory work, since he left DFR more than two years ago.

Samsom said he has had no official dealings with National Life during his tenure as tax commissioner. Upon accepting his new job, he agreed to disclose any matters related to the company to Young and Johnson, Kelley said. As of Monday, she added, Tax Department staffers "have been directed to divert any potential interactions" with National Life to the department's general counsel.

It's highly unusual for a cabinet official to remain in government service so long after accepting a job in the private sector, but Samsom said he was "committed to seeing the legislative session through." He currently plans to leave the department on May 25 and start at National Life on June 3. Kelley agreed that it "made sense" for him to finish his legislative work in order to "minimize disruption to the department."

According to National Life spokesperson Ross Sneyd, Samsom will be assuming a newly created position: deputy chief auditor. In that role, Sneyd said, he will lead the company's internal audit process, "providing an independent assessment of the strength and operating effectiveness of National Life's risk, control and governance activities."

Samsom said his experience leading DFR's insurance division "is very relevant" to his new job, but he bristled at the notion that he was taking a spin through the revolving door between regulator and regulated.

"I'd say that's without merit," he said. "I've not been in insurance regulation for two and a half years."

As for his decision to stay on at the Tax Department for so long? "These transitions at this level are probably always months in the making," he said. "And what may be unusual is that I disclosed to you when the decision was made — in full transparency."
Prev
Next