Walters: Scott Signs Bill on Ethnic and Social Equity in Schools | Off Message 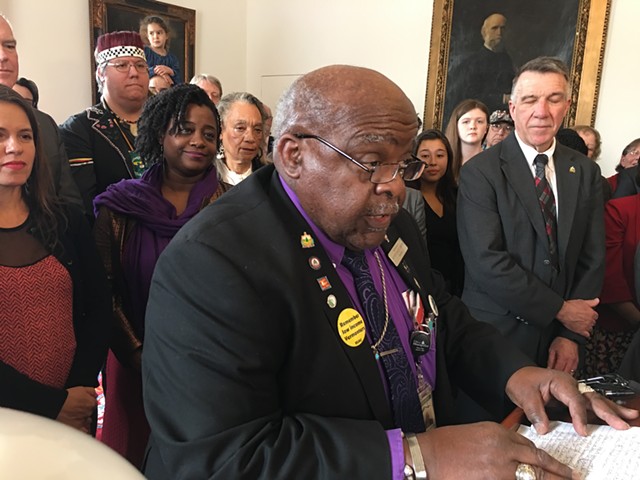 At a Friday afternoon ceremony, Gov. Phil Scott held his first bill signing of the 2019 session. The measure, H.3, is meant to advance ethnic and social equity in Vermont schools.

It calls for a working group to advise the Vermont Agency of Education on adopting statewide standards for ethnic and social equity education, and to require the state Board of Education to publish information on hazing, harassment and bullying incidents "disaggregated by student groups, including ethnic and racial groups, poverty status, disability status, English language learner status, and gender," according to the text of the law.

The signing ceremony took place before a large, enthusiastic and diverse crowd of supporters.

In a brief speech, Scott talked of the "educational benefits for kids" and the ultimate goal of creating "a more tolerant society."

"This is about Vermont and what we really stand for," said Rep. Kevin "Coach" Christie (D-Hartford), the lead sponsor of H.3. "We're not a perfect state, but we're a really great state." He noted that the bill was approved without opposition in both the House and Senate.

"This bill has been a labor of love for us," said Amanda Garces, founder of the Vermont Coalition for Ethnic and Social Equity in Schools, which has lobbied for the bill since November 2017. While she celebrated the enactment of H.3, she noted that, "This legislation is the beginning of a long road ahead of us ... to make change in Vermont."

The 20-member Ethnic and Social Equity Standards Advisory Working Group is to be formed by September 1. Its task is to develop educational standards and changes in state law aimed at creating a bias-free environment in schools, and instructional materials aimed at educating students about issues related to bias and inequality. The panel's deadline is June 30, 2021.
Prev
Next