Bernie Sanders Returns to New Hampshire as a Frontrunner | Off Message

Bernie Sanders Returns to New Hampshire as a Frontrunner

In his first trip to New Hampshire since joining the 2020 presidential race, Sen. Bernie Sanders (I-Vt.) credited Granite State Democrats with igniting his last national campaign — and called for their support once more.

“To the people of New Hampshire, let me say that you helped begin the political revolution in 2016,” he said Sunday afternoon in Concord. “And with your help on this campaign, we are going to complete what we started here.”

Speaking to a crowd of hundreds at the Grappone Conference Center, Sanders recalled that when he first campaigned in New Hampshire in 2015, he’d been “way, way, way behind” in the polls and his ideas had been dismissed as “too radical.” He would go on to win the state’s Democratic primary by more than 22 points.

This time around, Sanders made his New Hampshire debut as a frontrunner. Early polls of the state show him leading every other declared candidate in the field — and holding his own against former vice president Joe Biden, who is considering a run.

More importantly, Sanders argued Sunday, “Those ideas that we talked about when we came here to New Hampshire four years ago … are supported by a majority of the American people and they are being supported by Democratic candidates from school board to president of the United States.”

Since joining the race last month and kicking off his campaign last weekend in Brooklyn and Chicago, Sanders has been making the rounds of early-voting states. He spent three days in Iowa last week and is scheduled to visit South Carolina and Nevada later this week.

During his brief touchdown in New England, Sanders hailed its Town Meeting Day tradition, which he described as “people coming together in a community and arguing about how much they’re going to spend on education, how much they’re going to spend on the roads” and doing so in a respectful fashion. “You’ve got one vote per person,” he said. “And that, to me, is the essence of what democracy is about.”

Related The Bern Rekindles: Sanders Kicks Off His Second Bid for President

The Bern Rekindles: Sanders Kicks Off His Second Bid for President
By Kevin J. Kelley
Off Message
That tradition, Sanders said, stands in stark contrast to “America today under President Trump” — a place where “the very concept of democracy is under attack by a president who seems intent on emulating the authoritarian leaders in Russia, China, Saudi Arabia, North Korea and elsewhere that he seems to have so much affection for.”

Calling Trump “a pathological liar,” Sanders said that the president “is consistently on the wrong side” of what he called “a great struggle taking place between a growing authoritarianism and democracy.” In a departure from his usual criticism of the news media, Sanders offered a robust defense of press freedom — and slammed Trump for threatening it. “It is beyond disgraceful that our president refers to the American media as enemies of the people,” the senator said. “This is what demagogues do.”

Sanders pointed to Trump’s October 2018 praise for a Montana congressman who physically assaulted a reporter during an earlier campaign. “At a time when reporters around the world are literally being killed because of the work they are doing, Trump is intentionally intimidating the press here in the United States,” he said.

As he did during his trip to Iowa last week, Sanders sought to convey that he would be a team player whether or not he won the Democratic nomination. He said that many of his competitors are his friends and, “without exception, they are good people.” Their job, he said, “is not to tear each other down but [to] have a serious discussion about our future” and, once the primary is over, “rally together and defeat Donald Trump.” 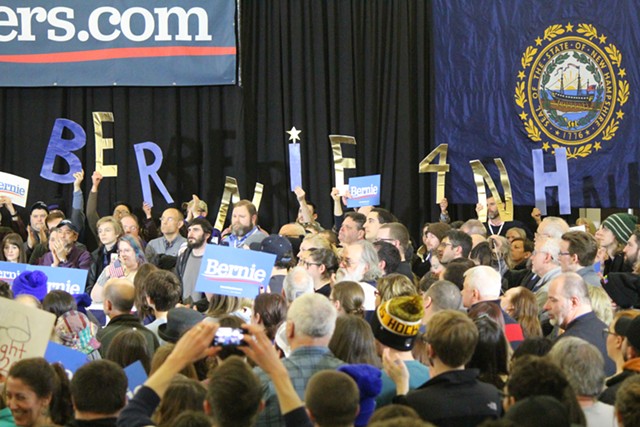 Sanders’ audience appeared enthused at his return to New Hampshire and grew ever more voluble as the candidate worked his way through his hour-long stump speech.

“Today we say to Walmart, we say to the fast food industry —” Sanders began at one point, preparing to make his case for higher wages.

“Fuck you!” a woman interrupted, drawing cheers from the crowd and a grin from Sanders.

“Well, that’s one way that we say it,” he responded. “I’m a United States senator. I can’t say that. But what we will say is: Start paying your employees a living wage.”

Though the 2020 New Hampshire primary is nearly a year away, some in the Grappone Center appeared to have already made up their mind about who they would back.

“I supported him in 2016 and I support him 100 percent now,” said Roger Goode, a Hillsboro painter, citing what he called Sanders’ “integrity and consistency.”

Others weren’t quite ready to pull the trigger. Mary Kusturin, a graduate student from Hopkinton, said she supported Sanders in 2016 but wanted to see more candidates before making up her mind in 2020.

Though Kusturin said she agreed with much of Sanders’ platform, she wondered whether he would be able to implement it.

“All of these things would be really nice to have,” she said. “But the reality is that I think it’s a lot more complicated than we like to make it seem at these rallies.”
Prev
Next