Out on the ice of Shelburne Bay Thursday, past the fishing shanties and frozen-in-place moorings, a burned-out mass of metal resembled a leftover prop from the set of Mad Max: Fury Road.

It was no prop. But the refuse was, in a sense, futuristic: It was the remnants of a 2019 Tesla Model X that went up in flames Sunday on Lake Champlain.

Shelburne Fire Chief Jerry Ouimet said his department could do little when members responded around 8:15 p.m. that night. The blaze was hundreds of yards from the nearest access point at the Shelburne Bay Boat Ramp and, while the ice was thick, "It's nothing we're gonna throw a 50,000-pound fire truck on," he said.

Ouimet called in the Charlotte Fire Department, which responded with an ATV equipped with a portable pump and hose, but the electric-powered SUV was already beyond saving.
"There was no way we could get anything out there," Ouimet told Seven Days. "As a firefighter, I've never felt so helpless before."

The operator told police and firefighters that he'd been driving in South Burlington when he thought he hit a rock or big piece of ice on the road. The man stopped to check for damage and couldn't see anything, though he thought he smelled something "strange," according to Ouimet. 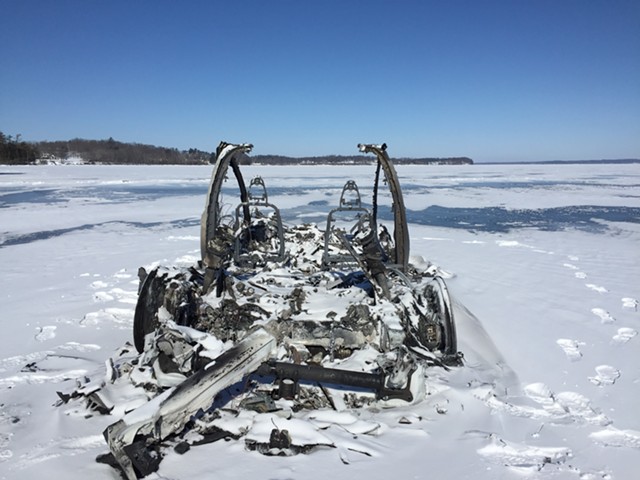 The driver, whose identity Ouimet did not know, then drove his Tesla onto the bay to go ice fishing. He was out of the car when he heard a hiss, and the $82,000 vehicle went up in flames.

The man had gotten a ride to shore by the time police and firefighters spoke with him, according to Ouimet.

"He seemed ... more in shock than anything," the fire chief said. "He was hoping we could do something, but when we told him it was out of our hands, he was a little distraught."

The U.S. Coast Guard also responded to the scene, according to Ouimet, and the authorities called the Vermont Fish & Wildlife Department to report the incident. Ouimet said it'll be the driver's responsibility to get the husk of the car off the ice.

It was still out there Thursday morning, not far from where two ice fishermen had set up. Erick Wallace told Seven Days he'd assumed the burned mass was the remains of some kids' driftwood bonfire. Dave Steele said he'd heard about the car fire and was concerned that pollutants from it would leach into the lake.

The Shelburne police officer leading the probe has spoken with the owner, according to Sgt. Josh Flore, but the incident remains under investigation. To try to learn the cause of the fire, authorities will need to take a look at the burned shell of the car once it’s removed from the bay.

"There’s a lot that plays into this. When’s the last time you heard of someone driving a Tesla out on the lake?" Flore said. "I think everybody’s trying to figure out what happened. Unfortunately, we won’t have more of an idea until the car’s off the ice."

Flore declined to identify the owner, citing the incomplete report.

"Could the guy have been going ice fishing? Maybe, maybe not — who knows," Flore said. "And we won’t know the answer to that until the investigation is concluded and the officer can make a good, informed decision on the path he’ll take."

The incident has gotten attention online after someone posted about it on the Tesla Motors Club forum. The website Electrek later picked it up, as did Jalopnik and Popular Mechanics.

For good reason. Ouimet said the call was unique for his department.

"It was an interesting situation," he said. "That was a first for us."
Prev
Next